“Before nine o’clock in the evening every chest on board the three vessels was knocked to pieces and flung over the sides. They say the actors were Indians from Narragansett. Whether they were or not, to a transient observer they appeared such…” 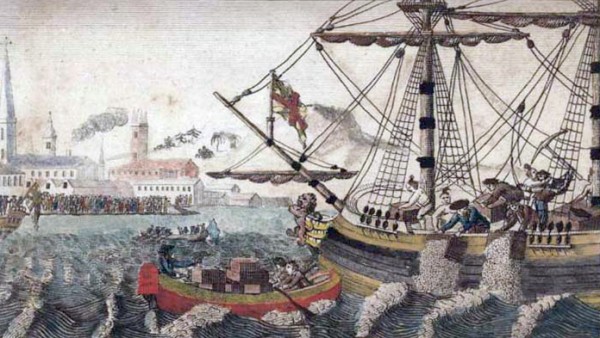 The Boston Tea Party took place on December 16, 1773. Organized by the Sons of Liberty, the demonstrators, some disguised as American Indians, destroyed an entire shipment of tea sent by the East India Company, in defiance of the Tea Act of May 10, 1773. They boarded the ships and dumped the chests of tea into Boston Harbor. The British government responded harshly and the episode escalated into the American Revolution. Below is a participant account of the event.

The house was so crowded that I could get no further than the porch. I found the moderator was just declaring the meeting to be dissolved. This caused another general shout out-doors and inside, and three cheers.

What with that and the consequent noise of breaking up the meeting, you’d have thought the inhabitants of the infernal regions had broken loose. For my part I went contentedly home and finished my tea, but was soon informed what was going forward. 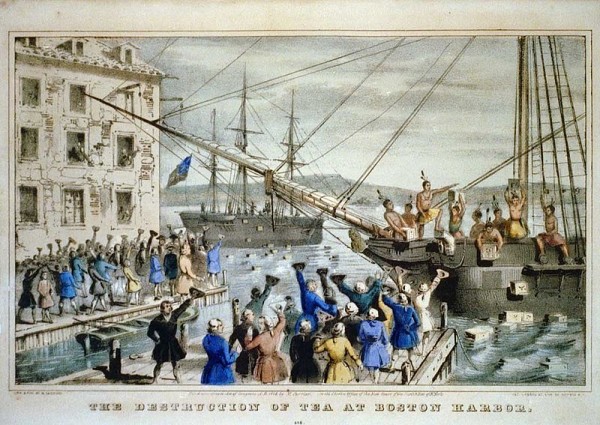 As I could not believe it without seeing for myself, I went out and was satisfied. The Indians mustered, I’m told, upon Fort Hill, to the number of about two hundred, and proceeded, two by two, to Griffin’s wharf, where Hall, Bruce, and Coffin’s vessels lay.

Coffin’s ship had arrived at the wharf only the day before, and was freighted with a large quantity of other goods, which they took the greatest care not to injure in the least.

Before nine o’clock in the evening every chest on board the three vessels was knocked to pieces and flung over the sides. They say the actors were Indians from Narragansett. Whether they were or not, to a transient observer they appeared such.

They were clothed in blankets, with their heads muffled and copper colored faces. Each was armed with a hatchet or axe or pair of pistols. Nor was their dialect different from what I imagine the real Indians to speak, as their jargon was nonsense to all but themselves.

Not the least insult was offered to any person, except to Captain Connor, a livery-stable keeper in this place, who came across the ocean not many years since. He ripped up the lining of his coat and waistcoat under the arms, and, watching his opportunity, he nearly filled them with tea.

When detected he was handled pretty roughly. The people not only stripped him of his clothes, but gave him a coat of mud, with a severe bruising into the bargain. Nothing but their utter aversion to making any disturbance prevented his being tarred and feathered.