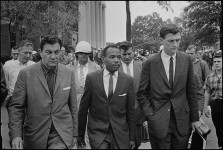 “I’ve always been at war with a system, not people”. On October 1, 1962, James Meredith became the first African-American student admitted to the University of Mississippi. Meredith’s enrollment sparked protests and riots at the University’s campus, causing President Kennedy to call in troops from the U.S. Marshals, U.S. Army … Continue reading