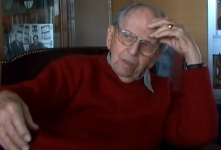 In this Legacy Project interview from 2006 with Raymond Aubrac, a leader of the French Resistance, he describes his efforts to oppose Nazi Germany’s occupation of France during World War II. He says of his brave peers in the Resistance: “That’s very amazing to consider–all these people were volunteers. Nobody had been forced into … Continue reading