Testimony from Sulaiman Abu Ghaith regarding his meeting with Osama bin Laden on September 11, 2011 following the World Trade Center attacks. The meeting took place in a cave amid the mountains in Afghanistan.

Mr. Abu Ghaith said he told Osama bin Laden: “America, if it was proven that you were the one who did this, will not settle until it accomplishes two things: to kill you and topple the state of Taliban. 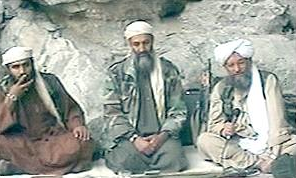 “He (bin Laden) said, ‘You are being too pessimistic.’”

Mr. Abu Ghaith said, he found Bin Laden “in a cave, inside a mountain, in a rough terrain.”

Bin Laden told him that “we are the ones who did it.”

On the morning of Sept. 12, he testified, Bin Laden told him he wanted “to deliver a message to the world.”

Mr. Abu Ghaith recalled saying that he was “new in this field.” He said Bin Laden replied, “I am going to give you some points and you build around them that speech.”

In those videotaped speeches, the first delivered on Sept. 12, 2001, as he sat beside Bin Laden, Mr. Abu Ghaith praised the Sept. 11 attacks and warned of others to come.

Mr. Abu Ghaith had said under direct examination, for example, that Bin Laden wanted him to lecture in the Qaeda camps because the trainees had a “hard life.”

“I need you to change that,” Bin Laden told him, Mr. Abu Ghaith recalled. He said Bin Laden wanted him to make them be merciful.

Prosecutor, Michael Ferrara, later asked Mr. Abu Ghaith, “You’re telling this jury that Bin Laden asked you to speak at those training camps where men were armed and learning how to use guns because he wanted you to talk about mercy?”

Mr. Abu Ghaith had also testified on direct examination that he had no idea “specifically” that the Sept. 11 attacks would occur, saying he only learned of them from news reports.

But on cross-examination, he admitted that in the training camps, he had heard that “something” might happen.

“You knew something big was coming from Al Qaeda?” Mr. Ferrara asked.

During the questioning by Mr. Cohen, Mr. Abu Ghaith said that he had hoped that his speeches and videos would have led the United States to say, “Let’s go and sit down and talk and solve this problem.”