I, James Hicks, of the county of Elizabeth City, State of Virginia, do solemnly swear or affirm in presence of Almighty God, that I will henceforth faithfully support, protect, and defend the Constitution of the United States, and the Union of the States thereunder, and that I will in like manner abide by and faithfully support all laws and proclamations which have been made during the existing rebellion, with reference to the emancipation of slaves. So help me God.

I, William H. Barry, Clerk of the United States District Court, for the District of Virginia, do hereby certify that the foregoing is a true and correct copy of the original Oath of James Hicks on file in my office.
In testimony whereof, I have hereunto set my hand and affixed the seal of said Court, at the City of Norfolk, in said District, this 29 day of January A.D. 1866
W. H. Barry. Clerk.” 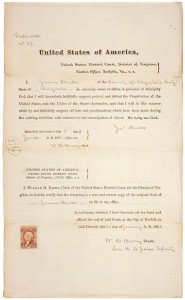 Records of the Bureau of Refugees, Freedmen, and Abandoned Lands