By Veterans History Project • May 19, 2014 Uncategorized

Bernard Horowitz, a technician in the U.S. Army’s 553rd Military Police Escort Guard (MPEG) Company during World War II, is interviewed by Jonathan Salomone. In this interview, Horowitz talks about what jobs he was assigned to do when he first got to Normandy, nine days after D-Day. Horowitz explains the horrors of having to see dead soldiers everywhere as he arrived. He also recalls a time when he was almost shot  because he didn’t take cover with his company as the Germans opened fire: 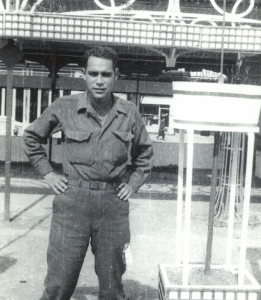 Bernard Horowitz: On D+1, I was walking down the street and I was accosted by an elderly woman that said, “The British are dying while you American soldiers are staying in England.” What she didn’t know is that we landed on two beaches and they landed on one with the Canadians on another.

Jonathan Salomone: Yeah. Did you say anything?

Bernard Horowitz: No, you know, because you pick up an English paper, it was all about the British, nothing about the — she didn’t know that we were –

Jonathan Salomone: And then from Birmingham, England, where did you go after that?

Bernard Horowitz: In Birmingham, England, we had time to travel. 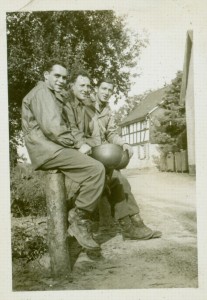 Bernard Horowitz: But we weren’t able to get to London because we had — there was a 50-mile radius that you could travel, and London was out of our — so I didn’t get to London. Then from there, we went to Plymouth. It was on D+4. We — I’ll tell you we were being trained how to come off boats into landing crafts, climb down rope ladders into the — so for a week, we were up and down ladders and all that, and then we boarded the ship. It was the British — Royal British — I don’t know what — called the Amble. It was a victory ship, and we sailed there. And on D+5 we were offshore. We had the balloons above us to protect us if airplanes came, but there was no — D+9 we — instead of us climbing down the ropes, because we were the last ones on the ship, they put us into the landing craft, loaded us in the water, then we came ashore on landing craft. And our Captain wanted to show that the 553rd was a good outfit. He was lining us up to march us off the beach when General Roosevelt who was killed about four or five days later in friendly fire came running down the beach and he says, “Get these men off the beach. There’s men being killed here,” because we were still in range of artillery fire. And he was going to march us off, you know, parade us off the — so we had to zigzag up a cliff through a minefield into the hedgerow. Do you know what the hedgerows were? 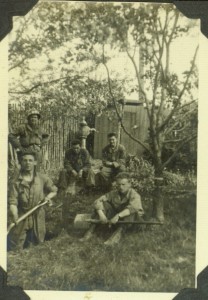 Bernard Horowitz: The farmlands governed. And we had to dig in on the sides, and the first thing we saw when we — was a helmet just like ours with the MP with the white stripe around it with a bullet hole through it. So that was — and we would dig in. They didn’t really have any jobs for us.

Bernard Horowitz: You know, because it was too early, so we — one of our jobs was taking prisoners out to bury the dead in St. Mere Eglise. One of the jobs I had was taking prisoners out on the field and burying the dead cattle that were bloated. Then we got the job of watching French collaborators that were being interviewed by CID people, and then we got — our first job was with the 82nd Airborne Division.

Bernard Horowitz: They lost most of their MPs in the jump, and we did traffic control for them when they cut the Cherbourg Peninsula.

Jonathan Salomone: What was that like when you were working -

Bernard Horowitz: Well, we had our first casualties. We lost two of our fellows and one was wounded. And I did a stupid thing, and I keep thinking about it now.

Jonathan Salomone: What did you do? 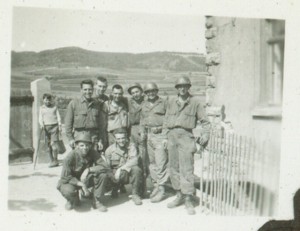 Bernard Horowitz: Our company was up on top of a cliff, on the top of a hill, and about two or three miles away was the German 88 guns, and they could see us whenever we sat down and they would open up with their guns. We had C-rations which was canned food, and in the canned food there was always two or three cans of franks and beans, and you never — it was rarely that you got it. And I was heating the can on the thing when the Germans opened up fire, and I says I’m going to stay here and eat my franks and beans because everybody was going to their foxhole when a shell hit in the next foxhole and a piece of shrapnel landed next to me.

Jonathan Salomone: That was a wake-up call.

Bernard Horowitz: A wake up to go and left everything. But to this day, I think what would have happened if that shell — I wouldn’t be here.

Bernard Horowitz: I was lucky the shell hit in the hedgerow next to us.

Jonathan Salomone: Did you guys end up returning fire or just kind of seek shelter? 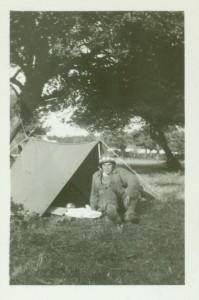 Bernard Horowitz: Well, we were doing control — you know, most of the things — the Air Force, we would watch them dive bomb the area, and they didn’t do the job, and then they finally heard that the 82nd went up there and cleaned it out. After we were finished with that, we were back with nothing much to do and when the break-through of Saint-Lo — before Saint-Lo, if you know the story of Saint-Lo, there was a bombing. We were right outside of Saint-Lo. They moved us back about ten miles. The B-17s came over in waves and just bombed the city and every time they would go by, the 240 Howitzers opened up. After they, the B-17s and the B-24s came over and bombed. And when they passed over, then the 240 Howitzers opened up again and then the dive bombers came in. This is on just this town.

Bernard Horowitz: Well, after that, the prisoners that came in were so shaken up they couldn’t talk, and that was the breakthrough. And then we headed to Versailles, to the Versailles Gardens, for a reassignment.

See the full transcript of the interview here.