Witnify » Abraham Lincoln
[Text] On Lincoln: ‘I Heard the Discharge of a Pistol Behind Me’

Abraham Lincoln
[Text] On Lincoln: ‘I Heard the Discharge of a Pistol Behind Me’ 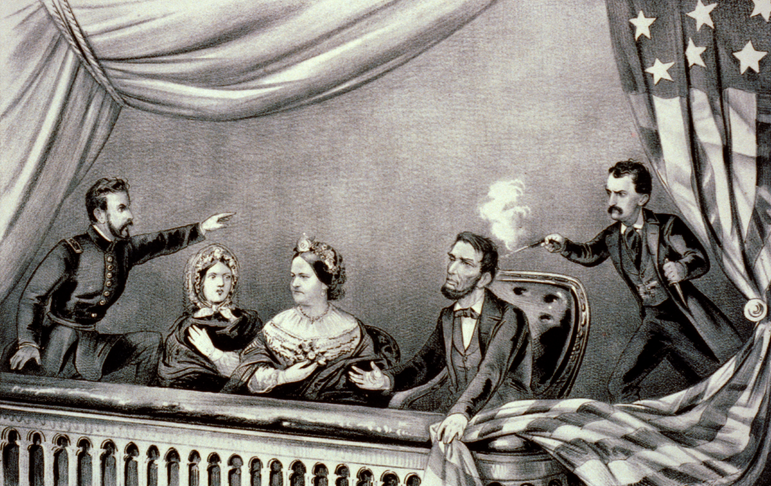 Major Henry Rathbone, sat with the Lincolns in their theater box and later testified at the official inquiry into the assassination. We join his story as he and his fiancé accompany the Lincolns to the theater:

On the evening of the 14th of April last, at about twenty minutes past 8 o’ clock, I, in company with Miss Harris, left my residence at the corner of Fifteenth and H Streets, and joined the President and Mrs. Lincoln, and went with them, in their carriage, to Ford’s Theater, on Tenth Street. On reaching the theater, when the presence of the President became known, the actors stopped playing, the band struck up “Hail to the Chief,” and the audience rose and received him with vociferous cheering. The party proceeded along in the rear of the dress-circle and entered the box that had been set apart for their reception. On entering the box, there was a large arm-chair that was placed nearest the audience, farthest from the stage, which the President took and occupied during the whole of the evening, with one exception, when he got up to put on his coat, and returned and sat down again.

When the second scene of the third act was being performed, and while I was intently observing the proceedings upon the stage, with my back toward the door, I heard the discharge of a pistol behind me, and, looking round, saw through the smoke a man between the door and the President. The distance from the door to where the President sat was about four feet. At the same time I heard the man shout some word, which I thought was ‘Freedom!’ I instantly sprang toward him and seized him. He wrested himself from my grasp, and made a violent thrust at my breast with a large knife. I parried the blow by striking it up, and received a wound several inches deep in my left arm …. The man rushed to the front of the box, and I endeavored to seize him again, but only caught his clothes as he was leaping over the railing of the box. The clothes, as I believe, were torn in the attempt to hold him. As he went over upon the stage, I cried out, ‘Stop that man.’ I then turned to the President; his position was not changed; his head was slightly bent forward and his eyes were closed. I saw that he was unconscious, and, supposing him mortally wounded, rushed to the door for the purpose of calling medical aid. 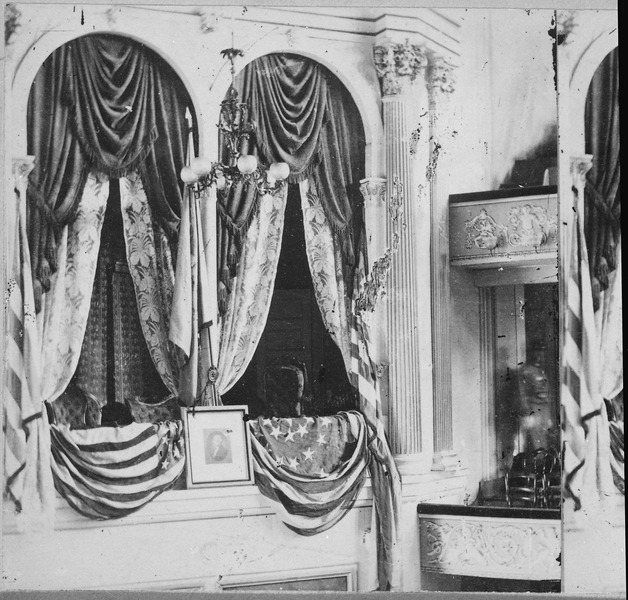 On reaching the outer door of the passage way, I found it barred by a heavy piece of plank, one end of which was secured in the wall, and the other resting against the door. It had been so securely fastened that it required considerable force to remove it. This wedge or bar was about four feet from the floor. Persons upon the outside were beating against the door for the purpose of entering. I removed the bar, and the door was opened. Several persons, who represented themselves as surgeons, were allowed to enter. I saw there Colonel Crawford, and requested him to prevent other persons from entering the box.

I then returned to the box, and found the surgeons examining the President’s person. They had not yet discovered the wound. As soon as it was discovered, it was determined to remove him from the theater. He was carried out, and I then proceeded to assist Mrs. Lincoln, who was intensely excited, to leave the theater. On reaching the head of the stairs, I requested Major Potter to aid me in assisting Mrs. Lincoln across the street to the house where the President was being conveyed.

In a review of the transactions, it is my confident belief that the time which elapsed between the discharge of the pistol and the time when the assassin leaped from the box did not exceed thirty seconds. Neither Mrs. Lincoln nor Miss Harris had left their seats.

Visit Eyewitness History to read more about the assassination of President Abraham Lincoln on April 14, 1865.