The following is a letter from Gandhi to Adolf Hitler written on July 23, 1939 before the official beginning of World War II. It is transcribed below: 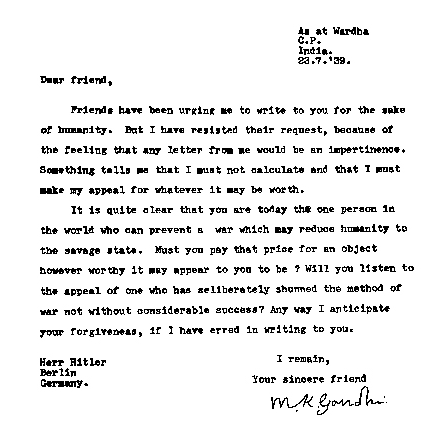 Friends have been urging me to write to you for the sake of humanity. But I have resisted their request, because of the feeling that any letter from me would be an impertinence. Something tells me that I must not calculate and that I must make my appeal for whatever it may be worth.

It is quite clear that you are today the one person in the world who can prevent a war which may reduce humanity to the savage state. Must you pay that price for an object however worthy it may appear to you to be? Will you listen to the appeal of one who has deliberately shunned the method of war not without considerable success? Any way I anticipate your forgiveness, if I have erred in writing to you.