During the Spanish Civil War, many foreign volunteers arrived in Spain in order to try to prevent the Spanish Republican government from falling to fascism. This is a letter from a female American volunteer, Mary Rolfe, in Barcelona who describes the motivations that her fellow volunteers had for coming to Spain from various places, but particularly England and Germany. She talks in particular about one raid that still frightens her as it haunts her memories. Rolfe also talks about her encounter with famous American author Ernest Hemingway. The Spanish Civil War began on July 17,1939 and ended on April 1, 1939. Rolfe’s letter:

The enclosed note was written after the first two bombings on Wednesday—and I thought when I started that I could overcome the reaction of the morning, but I had to stop. Now, though still a little limp and sickish, I can write of the last two days with more or less ease. 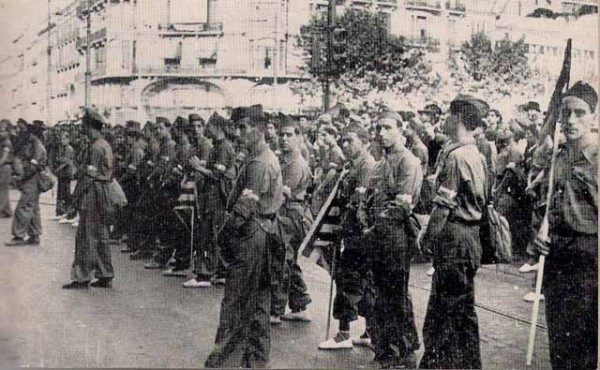 The first raid, at about 10:30 A.M., came while two American soldados [soldiers] and I were in a shop buying cigarette holders. The boys had come to Barcelona to buy some trinkets for their girls and I went along with them to help them choose. The shop we were in is some three or four blocks from the hotel and some six or seven blocks from where the first bombs fell.

The siren sounded just as we were paying our bill. We saw the people hurrying along the Paseo de Gracia (our street) into sheltering doorways, or hugging the walls. We stepped into a doorway, going out to look up when the anti-aircraft started and I spotted three planes—enemy planes flying high, they looked minute. The guns were hot on their trail and the boys pulled me back into the doorway because very often the shrapnel casings of the aircraft shells fall and get you. As we got back to the doorway we heard the bombs falling—and the boys made me crouch down, close to them with my head buried in my arms. The sound of those bombs, and they sounded close (as we found later they were) is hard to describe—crashing through the air as if to break the very air itself, screeching and whining and then the contact as they hit their target—as if a thousand wrecking crews were tearing down buildings at the same time. I wasn’t frightened then, my mind was blank—I was concerned only with crouching down in the doorway. We got up then and started walking to the hotel, the people in the streets came to life, continuing to walk to wherever they had been going when the alarm sounded; we reached the next corner to see a crowd of people pointing up at the sky and then a shout arose, and cheering as our guns got one plane—it came down hurtling through the air head over heels. We were excited, forgetting completely the bombs falling a minute before and we hurried to the hotel to find Ed. We found him there, worried but relieved to see us. Everyone talked about the downed plane—but soon life went on as usual. …

Hemingway was here for a few days—but once you meet him you’re not likely to forget him. The day he came I had been slightly sickish, but Ed came up and got me up out of bed to meet him. When I came into the room where he was he was seated at a table and I wasn’t prepared for the towering giant he is. I almost got on my toes to reach his outstretched hand—I didn’t need to, but that was my first reaction. He’s terrific—not only tall but big—in head, body, hands. “Hello,” he said—looked at me and then at Ed and said “You’re sure you two aren’t brother and sister?” which meant—”what a pair of light-haired, pale, skinny kids!” . . .

And now—I’ll say goodbye—I promise not to let so long a time go by the next time I write.