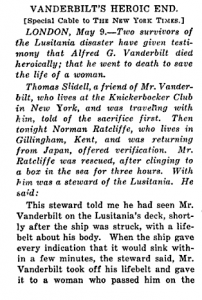 LONDON, May 9.—Two survivors of the Lusitania disaster have given testimony that Alfred G. Vanderbilt died heroically; that he went to death to save the life of a woman.

Thomas Slidell, a friend of Mr. Vanderbilt, who lives at the Knickerbocker Club in New York, and was traveling with him, told of the sacrifice first. Then tonight Norman Ratcliffe, who lives in Gillingham, Kent, and was returning from Japan, offered verification. Mr. Ratcliffe was rescued, after clinging to a box in the sea for three hours. With him was a steward of the Lusitania. He said:

This steward told me he had seen Mr. Vanderbilt on the Lusitania’s deck, shortly after the ship was struck, with a lifebelt about his body. When the ship gave every indication that it would sink within a few minutes, the steward said, Mr. Vanderbilt took off his lifebelt and gave it to a woman who passed him on the deck, trembling with fear of the fate she expected to meet.

The steward said Mr. Vanderbilt turned back, as though to look for another belt, and he saw him no more. 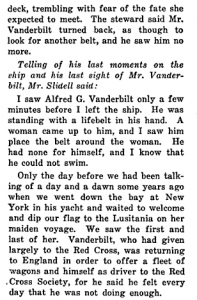 Telling of his last moments on the ship and his last sight of Mr. Vanderbilt, Mr. Slidell said:

I saw Alfred G. Vanderbilt only a few minutes before I left the ship. He was standing with a lifebelt in his hand. A woman came up to him, and I saw him place the belt around the woman. He had none for himself, and I know that he could not swim.

Only the day before we had been talking of a day and a dawn some years ago when we went down the bay at New York in his yacht and waited to welcome and dip our flag to the Lusitania on her maiden voyage. We saw the first and last of her. Vanderbilt, who had given largely to the Red Cross, was returning to England in order to offer a fleet of wagons and himself as driver to the Red Cross Society, for he said he felt every day that he was not doing enough.