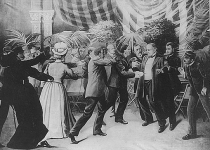 President McKinley, whose popularity was heightened by the victory of the United States in the Spanish-American war, was easily returned to a second term in the election of 1900. His running mate was Theodore Roosevelt, Governor of New York. In less than a year McKinley’s presidency was cut short by … Continue reading