Soldiers who fought in the Battle of the Somme during World War I recount the conditions they faced during the several months-long battle. One soldier remembers a period of seven days and seven nights without having anything to eat or drink and describes being constantly in fear of an endless … Continue reading 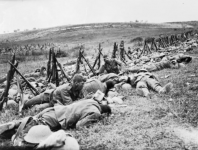 Several Battle of Somme veterans relive their traumatic experiences as young soldiers in the 1916 Battle of the Somme, also known as the Somme Offensive. With more than 1,000,000 men wounded or killed in combat, the Battle of the Somme is regarded as one of the bloodiest battles of World … Continue reading