On December 17, 2014, United States President Barack Obama announced a new chapter of US-Cuba relations, with the restoration of diplomatic ties between the two nations. In this video, Jose Sanchez Gronlier expresses his thoughts on President Obama’s announcement, saying: “This is a sad day for the United States and … Continue reading

On December 11, 1964, Che Guevara addressed the United Nations General Assembly as head of the Cuban delegation. In expressing Cuba’s frustration with the actions of the United States, he says: “The United States, furthermore, tried to get the UN to inspect our territory. But we emphatically refuse, since Cuba … Continue reading 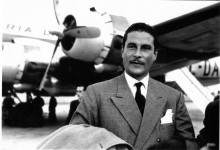 Famous actor Errol Flynn is interviewed about his time spent in Cuba during the Cuban Revolution. Flynn is very supportive of Fidel Castro and his regime and defends Castro when asked about the many executions that the Cuban leader ordered. Flynn met Castro in 1958 when he went to Cuba … Continue reading