See footage and hear from survivors of the remarkable “Long March.” Only one in ten survived. Mao Tse Tung led thousands of communists across China, demanding continual revolution.   The march began at 5:00 on October 16, 1934 and led to the creation of the People’s Republic of China The embattled … Continue reading 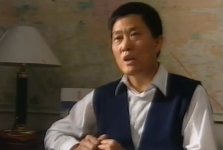 The Cultural Revolution in China began in 1966 under Chairman Mao Zedong and didn’t end until 1976 with his death. During this time, people were beginning to shift from a communist society to a free market, capitalistic society and Zedong felt like this was going to ruin China. This video … Continue reading

Wu Dingfu and Song Xiuling lament the death of their son, Wu Guofeng, a 20-year-old Chinese student who was among the first victims of the 1989 Tiananmen Square Massacre. On June 4, 1989, Wu Guofeng set out to document the student-led protests in Beijing with his camera, but instead was shot … Continue reading

Brandi Chastain was a member of the 1999 Women's national team and also took the final penalty kick on July 10th when they faced China in the finals of the World Cup. Continue reading