SPECTRUM: You, Frederick Durant, and Ernst Stuhlinger were all in Barcelona at an International Astronautical Federation meeting on 4 October 1957. What was your reaction when you got the news about Sputnik?

CLARKE: Although I had been writing and speaking about space travel for years, I still have vivid memories of exactly when I heard the news. I was in Barcelona for the 8th International Astronautical Congress. We had already retired to our hotel rooms after a busy day of presentations by the time the news broke. I was awakened by reporters seeking an authoritative comment on the Soviet achievement. Our theories and speculations had suddenly become reality!

For the next few days, the Barcelona Congress became the scene of much animated discussion about what the United States could do to regain some of its scientific prestige. While manned spaceflight and Moon landings were widely speculated about, many still harboured doubts about an American lead in space. One delegate, noticing that there were 23 American and five Soviet papers at the Congress, remarked that while the Americans talked a lot about spaceflight, the Russians just went ahead and did it! 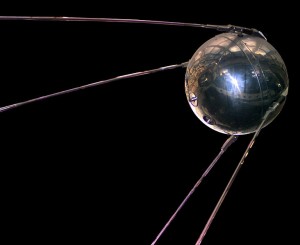 (A replica of Sputnik 1 from the National Air and Space Museum.)

SPECTRUM: In the past 50 years, has the Space Age lived up to your expectations?

CLARKE: On the whole, I think we have had remarkable accomplishments during the first 50 years of the Space Age. Some of us might have preferred things to happen in a different style or time frame, but when our dreams and aspirations are adjusted for reality, there is much we can look back on with satisfaction. (For example, in 1959 I took a bet that men would be landing on the Moon by June 1969, and lost only very narrowly.) And in the heady days of Apollo, we seemed to be on the verge of exploring the planets through manned missions. I could be forgiven for failing to anticipate all the distractions of the 1970s that wrecked our optimistic projections—though I did caution that the Solar System could be lost in the paddy fields of Vietnam. (It almost was.)

SPECTRUM: A lot of what was achieved at the beginning of the Space Age—from Sputnik to the first landing on the moon—was spurred on by the rivalry that was the Cold War. Without that competition, do you think the human impetus to reach for space has slowed somewhat?

CLARKE: Launching Sputnik and landing humans on the Moon were all political decisions, not scientific ones, although scientists and engineers played a lead role in implementing those decisions. (I have only recently learned, from his long-time secretary Carol Rosin, that Wernher von Braun used my 1952 book, The Exploration of Space, to convince President Kennedy that it was possible to go to the Moon.) As William Sims Bainbridge pointed out in his 1976 book, The Spaceflight Revolution: A Sociological Study, space travel is a technological mutation that should not really have arrived until the 21st century. But thanks to the ambition and genius of von Braun and Sergei Korolev, and their influence upon individuals as disparate as Kennedy and Khrushchev, the Moon—like the South Pole—was reached half a century ahead of time.

I hope that nations can at last see better reasons for exploring space, and that future decisions would be informed by intelligence and reason, not the macho-nationalism that fuelled the early Space Race.

Source: Visit spectrum.iee.org to read the rest of the interview with Sir Arthur C. Clarke.