Roger L. Chagnon, a Naval Officer in Charge (NOIC) during D-Day, gives his firsthand account of setting up radio and communication centers on the beaches of Normandy: 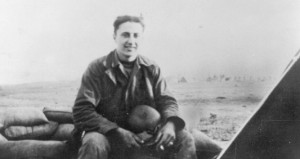 It was D-Day, June 6, 1944 – at approximately 10:30 a.m., the Communications Group, comprising about 7 officers and 40 enlisted men (mainly radiomen, yeomen and seamen) landed on the beach at an entry point, close to the present location of the Utah Beach Museum, and not far from the current Le Roosevelt Restaurant. They immediately set themselves up as an operational Communications Center, using three trucks containing all necessary radio equipment to perform their mission. Their job was to support the Naval-Officer-in-Charge (NOIC) of Utah Beach who, along with the Beachmaster of the 2d Naval Beach Battalion (2d NBB), was responsible for the landing of men and equipment on the beach during the day of the invasion and also, beyond that time. The NOIC of this group was Captain James E. Arnold.

The very concept of NOIC was new and applied for the first time at both Utah and Omaha Beaches. For Utah Beach, i.e. our case, personnel who were to form the NOIC Communications Group came from different units; some were taken from the 2d NBB, the 7th NBB, from various ships, and other naval amphibious organizations, only a short time before the invasion itself, and with a few exceptions, most of the men did not know each other. I remember we had three men, who were previously attached to the 7th Beach Battalion before joining our group, I think, that I was part of the 2d Beach Battalion while stationed at a New York Amphibious Base. Some seamen in fact came directly from New York, some just fresh out of Radio School, and others from Navy ships…I know for a fact, that our group was only integrated as a unit, no more than one month prior to D-Day….and I just joined this Group on May 19, 1944. 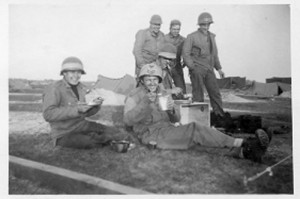 As members of Naval Amphibious land forces, NOIC personnel were dressed in standard Army Herringbone Twill (HBT) combat fatigues, with leggings, the only difference being our helmets which had a blue-gray band across their base, but we had no white-stenciled USN on them! We did not wear any shoulder insignia on our M41 field jackets (the yellow/red SSI was not yet authorized) and our individual equipment included basic items, such as cartridge belt, canteen, first-aid packet, shovel, knife, rifle, shelter tent, and of course some K-Rations, we carried no sidearms. According to Navy archives, our Group, sealed on board ship for about three whole weeks prior to landing (though, we were allowed to go to shore bases for fresh meals and showers) was part of Commander Task Group 12.4 (CTG 127.4), and after landing we became part of Commander Task Unit 127.2.4 (CTU 127.2.4), which was located on Naval Advance Base No. 12 (NAB 12). We were not the only radio people, credit should also be given to 2d NBB and Army 1st Engineer Special Brigade (1st ESB) communication groups who also landed on Utah Beach, June 6, 1944, and shared responsibilities similar to those of the NOIC Group.

Allied assault sea and air routes including the beaches for the Normandy Invasion.

D-Day 1, we received word from Naval Combat Demolition Units (NCDU) or the Army Engineer Special Brigade (ESB) units that an enemy bunker (probably used as a telephone control center, and attached to a damaged fisherman’s cottage) was clear of occupants and of booby-traps, so the NOIC people moved in. All radio equipment was removed from the trucks and relocated in the bunker. Outside antennas were installed, cables buried in the sand with help of German prisoners of war (POWs), and on June 8 the bunker became fully operational as a Radio Comcenter . Radio operations were based on three shifts per day, with men working two 4-hour shifts every day of the week, for close to five months. The center generally communicated with the other landing beaches (e.g. Omaha), off-shore vessels, and command ships . Operations continued until October 31, 1944, at which time all the men went off into different directions, depending on their assignments. I became a member of a Forward Intelligence Unit (FIU) comprising of one officer and five enlisted men (EM), engaged in operations against bypassed German pockets of resistance, this was mainly in the Gironde estuary . It was probably during their last days on Utah Beach, that 18 NOIC radio men wrote their names on the walls of the bunker, not knowing they would be discovered 50 years later. 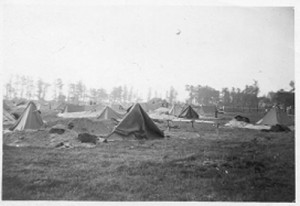 During the first weeks of D-Day, we lived in shallow foxholes or in 3-foot deep holes with pup tents set up directly over the holes. Basic food was K-Rations during the first week, later on this improved to some C-Rations and even 10-in-1s over many weeks, and finally, hot food in mess-hall tents provided by the CBs. As soon as the danger of possible enemy encounter had passed, most of the men, built large dugouts, for three or four men, big enough to hold cots, tables, chairs, and a little space for clothes. Our men lived in those dugouts for several months and enjoyed occasional visits from neighboring French civilians, some of whom provided us with calvados to drink and to use as light fuel for cooking outside. A little football here and there, and letter writing, accompanied with talk about going home ‘soon’ often took place. Eventually, the unit was to leave the dugouts and move into 4-man tents, set up by the Seabees.