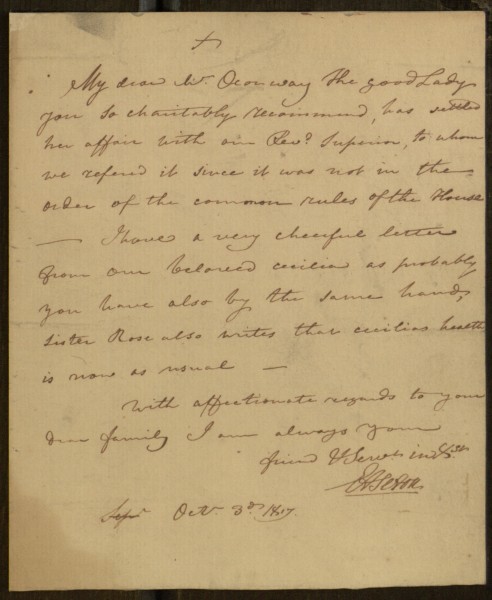 Elizabeth Ann Seton (August 28, 1774 – January 4, 1821) was the first native-born citizen[1] of the United States to be canonized by the Roman Catholic Church on September 14, 1975.    She established the first Catholic girls’ school in the nation in Emmitsburg, Maryland where she also founded the first American congregation of religious siststers, the Sisters of Charity.

She was canonized by Pope Paul VI on September 14, 1975, in a ceremony in St. Peter’s Square. In his words, “Elizabeth Ann Seton is a saint. St. Elizabeth Ann Seton is an American. All of us say this with special joy, and with the intention of honoring the land and the nation from which she sprang forth as the first flower in the calendar of the saints. Elizabeth Ann Seton was wholly American! Rejoice for your glorious daughter. Be proud of her. And know how to preserve her fruitful heritage.”

I have often told you my Rebecca[1] that I had determined never again to allow myself the enjoyment of any affection beyond the bounds of moderation – but really your affectionate letters, the rememberance of past hours, and the thousand thoughts of you that strike me every day at this place, makes it not an easy matter to restrain my expressions when I write you. I never sweep the Hall, or dress the flower Pots, or walk round th Pear-tree walk, but you are as much my companion as if you were actually near me, and last Eve[nin]g finding myself Accidentally by the Garden fence at the head of the lane where we once stood at sun-set last Fall anticipating What we would do this Summer if Willy[2] hired Craggdon, I was so struck with the recollection and the uncertainty of when I should see you again, that I had a hearty crying spell, which is not a very common thing for me, nor do I suppose would have happened but that I have ever since the first moment you left me had a strong presentiment that our seperation was for a long while –  my spirits too were very much depressed by a letter I received from Aunt Caley with a Box containing the Legacy’s of her Mother, one is her 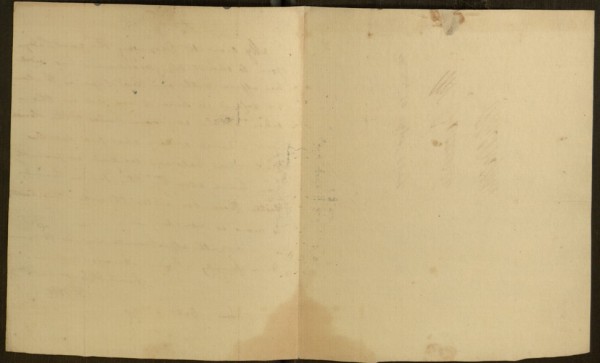 Watch left to Mrs. Andrew Seton, and to her Daughter Elizabeth at her death – the other the Picture of our Father which is left to his Eldest Daugther unmarried, consequently is yours my love. I suppose you remember the Picture it was done by Ramage and sent to your GrandMother in the year ninety. – I am to deliver it in your own hands is the direction. –

James, and Maitland were here yesterday Afternoon – Eliza has been very unwell – but is now better. She passed the day with me Sunday week with her darling little Babe and Dick was very Jealous of him as I had him most of the time – it is a fine lovely child. – James says his Darling Spaz has had the Dissentary, and seemed very low Spirited. I advised him to give her Rice water, which has cured Richard[3] every time he has had it. Poor Mary has really more trouble than she can bear. I have not had a letter from the Girls since Williams return, I suppose it is owing to their want of Quills and Paper. Ogden promised me he would send them a good stock to Aunty and she was to forward them. The Dear little Boys as sent a letter for Cecelia and have both written to me and to Willy also. You don’t know how much uneasiness I have had about William since his return he has been often unwell, tho’ nothing

very serious, yet enough [to keep] me in constant alarm. Your little Angel too has [had the] Sprue and suffered very much I send you a little curle of his beautiful light hair[4] cap. It will not be more precious to you than Celia’s wreath is to Anna, all the Gold and Silver in the world could not be half the Value to her – Kiss the dear little Puss for me a thousand times I wish I could send her something to remind her of her Birth day – but I will not forget her here – I suppose William told you Mrs. Scott is to spend some time with me – She is in very low spirits poor little soul, and as I am not very high so we jog on but heavily, She came last Saturday, with her Daughter about Harriets age, who is a very fine girl and delights Anna exceedingly for since little Aunty has been away she has been very much at a loss – Farewell my dearest Girl remember me to Maria – and believe me yours most affectionately