“Whatever these paintings may have been to men who looked at them generations back—today they are not only works of art. Today they are the symbols of the human spirit…” 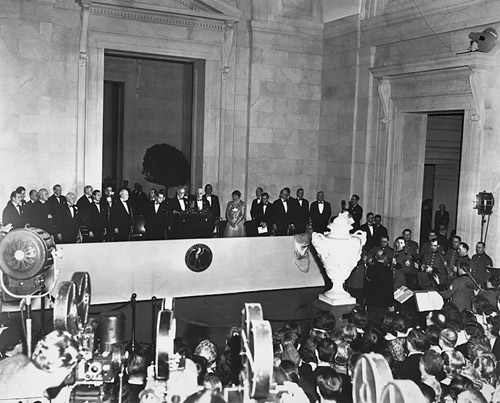 It is with a very real sense of satisfaction that I accept for the people of the United States and on their behalf this National Gallery and the collections it contains. The giver of this building has matched the richness of his gift with the modesty of his spirit, stipulating that the Gallery shall be known not by his name but by the Nation’s. And those other collectors of paintings and of sculpture who have already joined, or who propose to join, their works of art to Mr. Mellon’s—Mr. Kress and Mr. Widener-have felt the same desire to establish, not a memorial to themselves, but a monument to the art that they love and the country to which they belong. To these collections we now gratefully add the gift of Miss Ellen Bullard and three anonymous donors, which marks the beginning of the Gallery’s collection of prints; and also the loan collection of early American paintings from Mr. Chester Dale.

There have been, in the past, many gifts of great paintings and of famous works of art to the American people. Most of the wealthy men of the last century who bought, for their own satisfaction, the masterpieces of European collections, ended by presenting their purchases to their cities or to their towns. And so great works of art have a way of breaking out of private ownership into public use. They belong so obviously to all who love them—they are so clearly the property not of their single owners but of all men everywhere- that the private rooms and houses where they have lovingly hung in the past become in time too narrow for their presence. The true collectors are the collectors who understand this- the collectors of great paintings who feel that they can never truly own, but only gather and preserve for all who love them, the treasures that they have found.

But though there have been many public gifts of art in the past, the gift of this National Gallery, dedicated to the entire Nation, containing a considerable part of the most important work brought to this country from the continent of Europe, has necessarily a new significance. I think it signifies a relation—a new relation here made visible in paint and in stone—between the whole people of this country, and the old inherited tradition of the arts. And we shall remember that these halls of beauty, the conception of a great American architect, John Russell Pope, combine the classicism of the past with the convenience of today.

In accepting this building and the paintings and other art that it contains, the people of the United States accept a part in that inheritance for themselves. They accept it for themselves not because this Gallery is given to them—though they are thankful for the gift. They accept it for themselves because, in the past few years, they have come to understand that the inheritance is theirs and that, like other inheritors of other things of great value, they have a duty toward it.

There was a time when the people of this country would not have thought that the inheritance of art belonged to them or that they had responsibilities to guard it. A few generations ago, the people of this country were often taught by their writers and by their critics and by their teachers to believe that art was something foreign to America and to themselves—something imported from another continent, something from an age which was not theirs—something they had no part in, save to go to see it in some guarded room on holidays or Sundays.

But recently, within the last few years—yes, in our lifetime-they have discovered that they have a part. They have seen in their own towns, in their own villages, in schoolhouses, in post offices, in the back rooms of shops and stores, pictures painted by their sons, their neighbors—people they have known and lived beside and talked to. They have seen, across these last few years, rooms full of painting and sculpture by Americans, walls covered with painting by Americans- some of it good, some of it not so good, but all of it native, human, eager, and alive- all of it painted by their own kind in their own country, and painted about things that they know and look at often and have touched and loved.

The people of this country know now, whatever they were taught or thought they knew before, that art is not something just to be owned but something to be made: that it is the act of making and not the act of owning that is art. And knowing this they know also that art is not a treasure in the past or an importation from another land, but part of the present life of all the living and creating peoples—all who make and build; and, most of all, the young and vigorous peoples who have made and built our present wide country.

It is for this reason that the people of America accept the inheritance of these ancient arts. Whatever these paintings may have been to men who looked at them generations back—today they are not only works of art. Today they are the symbols of the human spirit, symbols of the world the freedom of the human spirit has made—and, incidentally, a world against which armies now are raised and countries overrun and men imprisoned and their work destroyed.

To accept, today, the work of German painters such as Holbein and Durer, of Italians like Botticelli and Raphael, of painters of the Low Countries like Van Dyck and Rembrandt, and of famous Frenchmen, famous Spaniards—to accept this work today for the people of this democratic Nation is to assert the belief of the people of this democratic Nation in a human spirit which now is everywhere endangered and which, in many countries where it first found form and meaning, has been rooted out and broken and destroyed.

To accept this work today is to assert the purpose of the people of America that the freedom of the human spirit and human mind—which has produced the world’s great art and all its science shall not be utterly destroyed.

Seventy-eight years ago, in the third year of the War Between the States, men and women gathered here in the Capital of a divided Nation, here in Washington, to see the dome above the Capitol completed and to see the bronze Goddess of Liberty set upon the top. It had been an expensive and laborious business, diverting money and labor from the prosecution of the war, and certain critics—for there were critics in 1863—certain critics found much to criticize. There were new marble pillars in the Senate wing of the Capitol; there was a bronze door for the central portal and other such expenditures and embellishments. But the President of the United States, whose name was Lincoln, when he heard those criticisms, answered: “If people see the Capitol going on, it is a sign that we intend this Union shall go on.”

We may borrow the words for our own. We too intend the Union shall go on. We intend it shall go on, carrying with it the great tradition of the human spirit which created it.

The dedication of this Gallery to a living past, and to a greater and more richly living future, is the measure of the earnestness of our intention that the freedom of the human spirit shall go on, too.