“There were guys lying on deck, sailors, and I thought, ‘Why are they sleeping here?’ I hadn’t connected that these guys were dead.”

Fritz Weinshank is a Jewish, native-born German who moved to America in 1935. Upon the start of World War II, Weinshank decided to enlist in the U.S. Army and keep American allegiances. The following is part of his personal narrative of his time in the military during the Normandy Campaign. This excerpt explains his physical struggles to try and make it to the shores of Omaha Beach from his transport ship on D-Day: 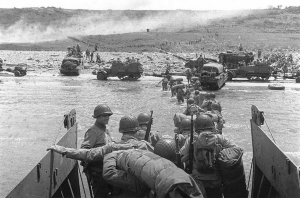 We were shown photos of Omaha beach, which was sectionalized. In other words, we were taken in a long line and shown posted-up, magnified photos of the beach. And I remember seeing a house at the Vierville exit. This house was to be our landmark. When we got there, there wasn’t any house. I remember seeing the bluffs, I remember seeing Germans walk on the beach, some P-38 pilot must have really taken his life in his hands taking these pictures. And we were shown that almost daily. And then, we were briefed on our part of the operation. Our platoon leader was Lieutenant Churan, and the second in command was Lieutenant Vincent Fournier. Almost the entire outfit was ranked because it was so technical and it was difficult finding a guy to pull KP.

Our destination was Easy Red on Omaha Beach. We were behind the infantry of the 29th, the 116th Regimental Combat Team. We were supposed to immediately establish contact in a net with the beach master and other posts that we were supposed to operate. Before we left Torquay, we had to mark our helmets with a white half-crescent and our insignia in the middle. The noncoms had horizontal stripes on the back of their helmets, the officers had vertical stripes…

Around May 28, or June the 1st, we saddled up and moved to an embarkation point. I think it was Bournemoth. We unloaded and we took it all on the boat. During one of the last days in that assembly area, I was in our tent and there was chow call. I was so anxious to go to the chow line, that I tripped between two ropes that were crosswise between two tents. I tore a ligament and I suffer from this to this very day. It was very painful, and my lieutenant noticed that I was limping and my greatest fear was that they would leave me behind, so I just smiled and said “Absolutely perfect,” and whenever he was around, I hid it…

The boat that we were on was an LCI and it was the famous LCI 92. We spent about four or five days on this boat, lying in that harbor, a typical Army “hurry up and wait” operation. We had to line up to get chow, we only got it two times a day. We had to do calisthenics on the dock, and more briefings, we were bored and we wanted the show to get underway.

One evening, June the 5th, they let go of the lines and the engines started going and we left, without fanfare just one after the other slipped out. We were then strung out in a long line of troop ships, all of them with large balloons up. Lieutenant Churan handed out the leaflets of Ike, “Soldiers, Sailors and Airmen, you are about to embark on a Great Crusade.” I did not take it as a monumental thing, something that the entire world would be watching. Quite on the contrary. We were concerned with the thing at hand and we didn’t give it a second thought.

Due to the fact that we had so much equipment, and we couldn’t carry it all, Lieutenant Churan and the braintrust in the platoon devised a method. We took a rubber boat and we filled it with the equipment and a number of guys were going to drag this boat ashore so that we wouldn’t have to carry it ashore. I was one of the guys who was the first to man this pontoon, get it off the deck. During the night, it started to get stormy and the boat started to rock, I and a few other guys lashed the thing down on deck so it wouldn’t float around, and fastened rubber tarps over it so it shouldn’t get wet. It was one of those miserable sea voyages that we had already gotten used to to some extent. 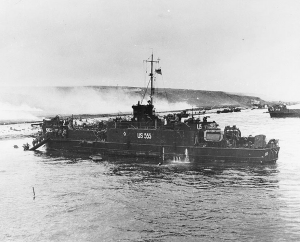 At this point, I have to say something about my attitude and the way I felt about the Germans.

I’m sure that if God had made me an “Aryan,” my bones would be resting somewhere in Russia, like those of my friends with whom I grew up. There was a friend in Gonsenheim, I take it that he was killed in Russia as a tank commander. My attitude towards the Germans was one of very intense curiosity. I wondered what had happened to them since I left and how the Nazi thing had developed and what they were like. It wasn’t hate exactly, but it wasn’t that I was crazy about them. I was influenced by the propaganda and by the general tenor that was prevalent at that time. I hated Hitler personally, and the krauts were the krauts. In that assembly camp, they had a training session where they had guys, probably from U.S. intelligence, who paraded before us in German uniforms giving the Hitler salute. It was a tremendous laugh success, we roared, and they were yelling “Achtung!” , a forerunner of “Hogan’s Heroes.” Later, we saw captured training films where German SS units were introduced to Yankee uniforms, and they had a gum-chewing American sergeant and they laughed just as much.

At this point I, in my 21- year- old infantile mind, thought that this was going to be another Army operation. We were in the third wave. The first wave would be already half-way to Paris and we wouldn’t even see any action. This was an Army operation, first wave was going to go on, roll right inland, and we were in the third wave and we were going to miss out again. I had the impression that the Germans were beaten and that they had no air force left and that it was just a sort of a mopping up operation.

Medics on the shore of Normandy tend to the wounded. U.S. National Archives.

OK, now it’s about 7:30 in the morning and we are down in the hold. We hear that the engines are slowing down and then I heard a scraping along the side of the ship, and I thought either we’re scraping an obstacle or else were are under machine gun fire. About 10, 15 minutes after we heard this scraping noise, or maybe a little shorter, there was a tremendous explosion. A great bang, as if the ship had been hit with some gigantic steel hammer. I remember seeing a flash and hearing yelling “Lets get out of here!” Our hold started to fill with smoke, acrid smoke, and the pipes were coming off the wall. The ship was on an angle, on an incline. Lieutenant Churan gave the order, “Bayonets out, cut off the bag of the guy in front of you, and out the hatch and out.” My buddy Newman was one of the first to leave, I was one of the last, Churan was the very last to leave the compartment. We went out on deck, and I saw my first casualties. There were guys lying on deck, sailors, and I thought, “Why are they sleeping here?” I hadn’t connected that these guys were dead. And then I went down the port side ladder, and I had my helmet and my rifle, and the rifle grenades. I had all three rifle grenades, I was supposed to be the rifle grenade guy. We didn’t think of our pontoon at that point, we left it. I went into the drink and it was over my head. I struggled, I swam on my back, towards the shore, about maybe 200 feet. I saw the beach and I saw the obstacles and I was back stroking, and I saw water spouts in the water behind me, and I felt solid ground.

I landed right at the entrance of the Vierville beach road, right between where the road winds between the hills, between the cliffs. I crawled up on the beach, I was half-drowned, and I saw nothing but dead Americans. I saw an American tank, that had gone to the water’s edge. It was right above the seawall, the little seawall, which was about, I would say, a maximum of three feet high, a gradual rise. Apparently the tank had been hit. I don’t know if there were anybody alive in it. I crawled underneath the tank and then some other guys crawled up. Somebody said to me, yelled to me, “Get out of here, they have this thing zeroed in.” So I started crawling along the seawall toward the east. I saw a guy that was slit open, he was smoking a cigarette, and the medic was administering to him. He had planted a rifle into the sand and he had a plasma bottle hanging from it, trying to save him. This guy was white and he was smoking and his guts and everything was just wide open. I found some of the previous waves, there were combat engineers, infantry, guys from the 116th, and our guys, and I found a few of our guys and we were just lying there, we couldn’t move around except crawl. I had my rifle but didn’t know what to do, I didn’t have my radio, and I couldn’t do my job.

The shelling was just horrible. German artillery just kept whining over my head and exploding in the water. There were landing craft that were being hit, guys were thrown up in the air. I saw one landing craft that was hit, the sides of the LCVP just collapsed, and guys walked into the water. Guys were dragged ashore by other guys. I started to get very, very scared. I had never been that scared in my life before. I was talking like a normal guy and I was doing things, just the fear was basic, it was just underneath. It didn’t prevent me from acting…

For the rest of Fritz Weinshank’s story, click here.