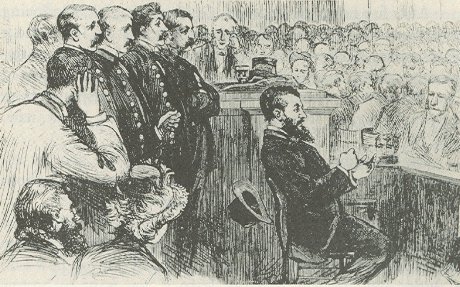 A sense of having been wronged, together with a warped idea of political duty, brought Charles Julius Guiteau to the Baltimore and Potomac Station in Washington on July 2, 1881.  On that same Saturday morning, President James Abram Garfield strode into the station to catch the 9:30 A.M. limited express, which was to take him to the commencement ceremonies of his alma mater, Williams College–and from there, Garfield planned to head off on a much-awaited vacation.  He never made the 9:30.  Within seconds of entering the station, Garfield was felled by two of Guiteau’s bullets, the opening act in what would be a drama that included rising and then  falling hopes for the President’s recovery, the most celebrated insanity trial of the century and, finally, civil service reform that backers hoped might discourage future disappointed patronage seekers from taking revengeful actions.
Below are excerpts from his cross-examination during his trial.  He was found guilty and was hung for the death of President Garfield on June 30th, 1882.
Cross-Examination

Q: (By Prosecution: Retired Judge John K. Porter) Are you conscious of being a man of very considerable ability?   A: (The Witness Guiteau) I express no opinion on that, Judge.

The Will of God

Q: Did you believe it was the will of God that you should murder him?   A: I believed that it was the will of God that he should be removed, and that I was the appointed agent to do it.   Q: Did He give you the commission in writing?   A: No, sir.   Q: Did He give it in an audible tone of voice?   A: He gave it to me by His pressure upon me.   Q: Did He give it to you audibly?   A: No, sir.   Q: He did not come to you in a vision of the night?   A: I don’t get my inspiration in that way.   Q: It occurred to you, as you laid there on the bed, that if President Garfield were dead, it would solve the whole question?   A: Yes, I say so.   Q: Did it occur to you that you were the very man to kill him?   A: Not at that time, sir. My mind was unsettled. I tried to throw it off.   Q: Whom did you think then was the man to kill him?   A: I had no thought on the subject, sir.   Q: You had no thought of his being killed by anybody then?   A: The mere impression came over my mind that if the President was removed, everything would go well.   Q: Did you contemplate his removal otherwise than by murder?   A: No, sir; I do not like the word “murder”; I don’t like that word.   Q: I know you do not like the word; it is a hard word, but it is there.   A: It don’t represent the actual facts in this matter.   Q: It does not represent the inspiration?   A: No, sir; it does not. If I had shot the President of the United States on my own personal account, no punishment would be too severe or too quick for me; but acting as the agent of the Deity puts an entirely different construction upon the act, and that is the thing that I want to put into this court and jury and the opposing counsel. I say this was an absolute necessity, in view of the political situation, for the good of the American people, and to save the nation from another war. That is the view I want you to entertain, and not settle down on a cold-blooded idea of murder. I never had the first conception of his removal as murder.   Q: Do you feel under great obligation to the American people?   A: I think the American people may some time consider themselves under great obligations to me, sir.   Q: My question was not whether they were under great obligations to you, but whether you were to them?   A: I do not know why I should be, sir.   Q: Were you under great obligations to the Republican party?   A: Not that I know of.   Q: That reminds me of a very deliberate utterance of yours, made on the 16th of June, the day on which you intended to murder him.   A: I intended to remove him under divine pressure. Put it right. I never intended to murder him.

THE COURT: You have not answered it directly. You can answer it yes or no, and then explain it afterwards. THE WITNESS: Ask the question again. MR. PORTER: Was one of your purposes in removing the President to create a demand for your book?

A: Yes, sir; with the modification that I have previously stated–to preach the gospel as set forth in the book.   Q: And you said in the paper which you wrote on the 20th of June, “It will save the Republic and create a demand for my book”?   A: That is correct, sir; that was the object of the inspiration to do those two things.   Q: Your book, I understand, you regard as the gospel?   A: I regard it, sir, as an important explanation of the Bible.   Q: Do you regard it as the gospel?   A: In a certain sense I do, sir.   Q: You believe in the doctrine of predestination, do you not?   A: Most decidedly. I claim that I am a man of destiny. I want to tell you and the public that I am a man of destiny. I claim that I am a man of destiny as much as the Savior, or Paul, or Martin Luther, or any of those religious men of the kind I was.   Q: And being a man of destiny, your destiny was to kill President Garfield?   A: My destiny was to obey the divine will.   Q: And from that day to this, you have never felt remorse for the dead?   A: Why, of course, I felt remorse so far–   Q: That is all. The cross-examination is ended. 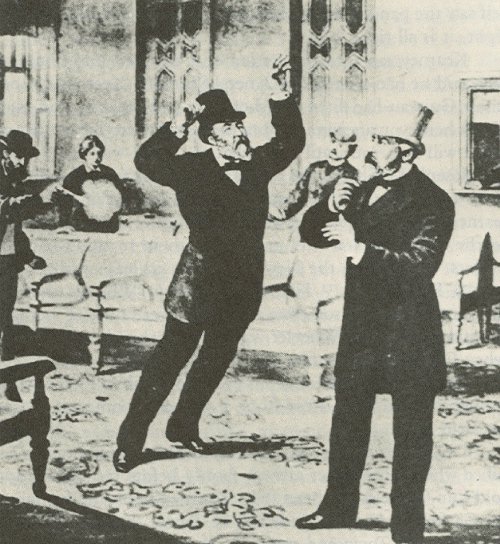