Cal Ripken Jr. on His Streak

What was your mindset heading into the game the night you broke the record for most consecutive games played?

I think if I can go back, my mindset going into the last week was the only time I felt in the whole streak that there was a finish line. I never set out to do this, I never set out to say “can I break this record?” Then all of a sudden the preparations made for the celebration put pressure on me. I said “OK, I have to get there.” After 2,130, there was sort of a realization it was a foregone conclusion you’re going to play tomorrow. There was a little sense of relief and I was more relaxed going into the 2,131 game than the 2,130 game.

It was important for me to play well and have our team play well and have the focus be on that and not necessarily the record-breaking game. I did have a sense of being a little bit more relaxed and any sort of pressure that had developed in that last week was gone. 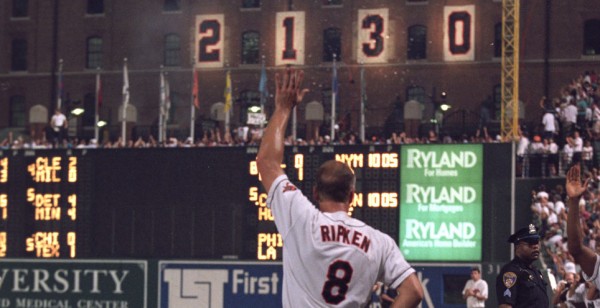 Once the game became official, there was a 22-minute ovation and, urged by your teammates, you did a lap around the field. What was that like?

I remember being a little overwhelmed. I really wasn’t aware of when the game became official, as far as the streak, but it started to present itself a couple weeks prior to the game, when they started playing a song in the fifth inning. When the actual game became official, depending on whether you were ahead or behind, top of the fifth or bottom of the fifth then it would become official and I knew we were going to have some sort of ceremony then resume the game. Everyone kept clapping and clapping and I had a chance to grab a moment with my kids and my family right there.

I kept acknowledging and thanking everyone for the outpouring of support and I kept going back to the dugout. There were curtain calls and I guess I did three or four or five of them. I remember Rafael Palmeiro and Bobby Bonilla said, “look, this thing’s not going to be able to start again unless you make a lap around the whole stadium.” I said, “I’m not making a lap around this whole stadium.” Once I came back for the last time, they physically pushed me. I think it was Bobby Bo and Raffy both, they physically pushed me and said “go, get this thing over with.” I started running down out of obligation to them and I started then shaking hands and a celebration that was 50,000-strong turned into a very personal one. It took me all around the stadium. I was concerned and embarrassed that the game was being delayed this long and then after I started making the lap, I didn’t care one bit about the game anymore. It was a pretty good experience.

The record-breaking day came during a shortened season after the strike. Did you think that moment would become such a big rallying point in baseball’s recovery from the strike?

I think we all felt when we lost the World Series the year before, all of us in the game felt the game had been harmed and the fans had been harmed by the process. I think a lot of us wanted to try to reach out and kind of help make that right. I do think it was a matter of timing. A lot of people were looking for things in the game they really loved. The streak, in my opinion, connected back to an era where people thought of it more as a game and it just reminded them of good things. I think there was a certain momentum created and generated in the ’95 year because people were looking for things that were good in sports. I think that streak, Lou Gehrig’s career being celebrated, was one of the perfect things for people to focus on. For me it was less about me and more how people cared about the sport.