Bill Means, a Lakota member of the American Indian Movement (AIM), which advocates for the rights of American Indians, discusses the events that led to AIM’s takeover and 71-day occupation of Wounded Knee on the Pine Ridge Indian Reservation of South Dakota.

The complex event that lead to the Wounded Knee incident begins with the American Indian Wars of the 1800s, which  many believe ended with the 1890 massacre of over 300 unarmed Lakota men, women and children by the U.S. 7th Cavalry Regiment near Wounded Knee Creek. The dead were left to stiffen in a blizzard and afterwords dumped in a mass grave. The massacre was one of many events which forced the Lakota, Nakota and Dakota peoples (commonly referred to as the “Sioux”) onto reservations where they would come to face many more injustices by the U.S. government. 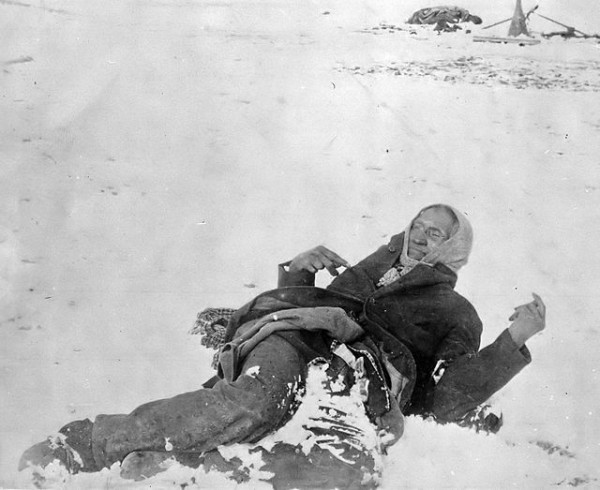 In the 1970s, tribal tensions rose on the Pine Ridge Indian Reservation for a variety of reasons, one of them being the widespread opposition to tribal president, Richard Wilson. AIM and “traditional” Lakota accused Wilson of corruption, favoritism towards his family for rare and coveted job opportunities and unfair treatment of political opponents; Wilson was charged for but avoided an impeachment trial by the Oglala Civil Rights Organization (OSCRO), three weeks before the Wounded Knee incident.

On February 27, 1973, AIM led a march of 200 Oglala Lakota and AIM followers through the reservation to the town of Wounded Knee in protest of Wilson–following OSCRO’s failure to impeach him. AIM also protested the U.S. government’s failure to honor treaties with the American Indian peoples. The band of 200 protesters seized and occupied the town of Wounded Knee; within the day, U.S. law enforcement including FBI agents surrounded the town and set up road blocks. Wilson’s paramilitary group, Guardians of the Oglala Nation (GOONs), set up their own roadblocks and surrounded Wounded Knee as well; thus, the standoff began and quickly escalated. 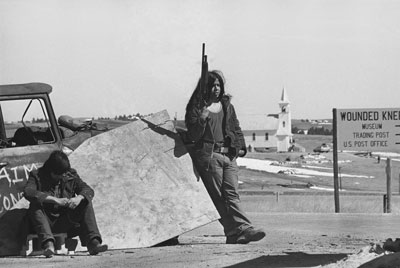 For the three months of occupation, both sides often fired at the other; when firing waned, activists streamed into the town to support the occupiers. Different estimates agree that the U.S. government sent approximately half of a million dollars worth of support to U.S. marshals and law enforcement to the site, including armored vehicles, helicopters, snipers, machine guns and 130,000 rounds of ammunition. The standoff ended on May 8, 1973 after two American Indians were killed, one civil rights activist supporting the Lakota disappeared and two U.S. agents were wounded.

Wide media coverage made the incident well-known as it occurred;  many were sympathetic to the Lakota and American Indians during and after the incident for the injustices they experienced at the hands of the American government. The incident also grabbed the attention of the international community. AIM leaders Russell Means and Dennis Banks were indicted due to the event, but their case was dismissed. Violence in Pine Ridge skyrocketed afterwards, with over 60 of Wilson’s tribal opponents dying in the next three years. Pine Ridge is still the poorest reservation in America and continues to battle health issues, poverty, unemployment and high suicide rates. Nevertheless, AIM’s standoff brought pride to many American Indians for its defiance against a government which so often mistreated, lied and forgot about its country’s first inhabitants.