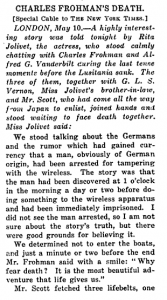 LONDON, May 10.—A highly interesting story was told tonight by Rita Jolivet, the actress, who stood calmly chatting with Charles Frohman and Alfred G. Vanderbilt during the last tense moments before the Lusitania sank. The three of them, together with G.L.S. Vernon, Miss Jolivet’s brother-in-law, and Mr. Scott, who had come all the way from Japan to enlist, joined hands and stood waiting to face death together. Miss Jolivet said:

We stood talking about the Germans and the rumor which had gained currency that a man, obviously of German origin, had been arrested for tampering with the wireless. The story was that the man had been discovered at 1 o’clock in the morning a day or two before doing something to the wireless apparatus and had been immediately imprisoned. I did not see the man arrested, so I am not sure about the story’s truth, but there were good grounds for believing it.

We determined not to enter the boats, and just a minute or two before the end Mr. Frohman said with a smile: “Why fear death? It is the most beautiful adventure that life gives us.”

Mr. Scott fetched three lifebelts, one for Mr. Vanderbilt, one for Mr. Frohman, and one for my brother-in-law. 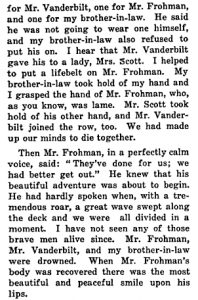 He said he was not going to wear one himself, and my brother-in-law also refused to put his on. I hear that Mr. Vanderbilt gave his to a lady, Mrs. Scott. I helped to put a lifebelt on Mr. Frohman. My brother-in-law took hold of my hand and I grasped the hand of Mr. Frohman, who, as you know, was lame. Mr. Scott took hold of his other hand, and Mr. Vanderbilt joined the row, too. We had made up our minds to die together.

Then Mr. Frohman, in a perfectly calm voice, said: “They’ve done for us; we had better get out.” He knew that his beautiful adventure was about to begin. He had hardly spoken when, with a tremendous roar, a great wave swept along the deck and we were all divided in a moment. I have not seen any of those brave men alive since. Mr. Frohman, Mr. Vanderbilt, and my brother-in-law were drowned. When Mr. Frohman’s body was recovered there was the most beautiful and peaceful smile upon his lips.