“You were just about the World’s worst mag when you started, but you set yourself an ideal, and, by gumbo, you achieved it!”

The “Game of Thrones” author George R. R. Martin wrote to Stan Lee and Jack Kirby, creators of Marvel, in 1963, raving about the the “Fantastic Four” comic book series. In this adorably enthusiastic letter from a teenage Martin, he is blown away by the plot twists and calls Marvel the “world’s greatest comic magazine”: 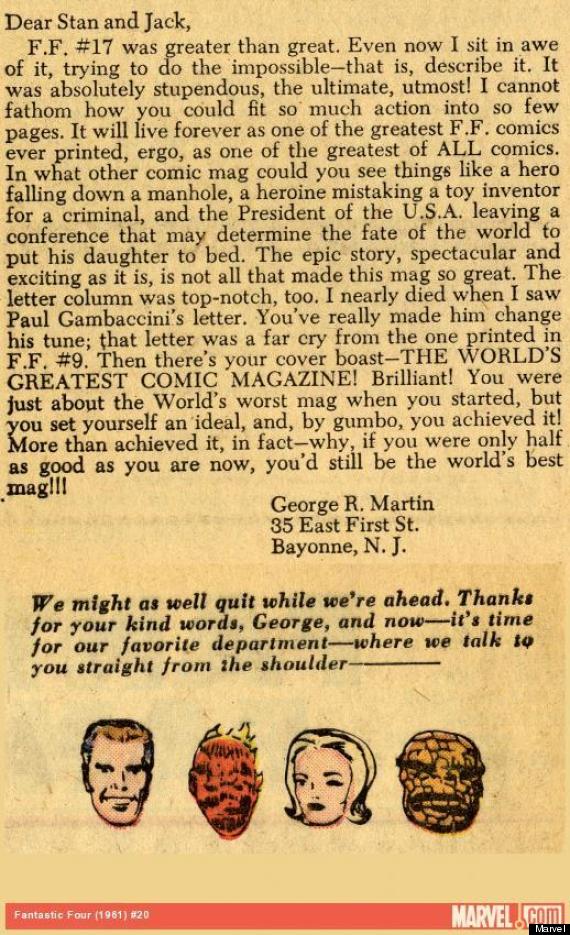 F.F. #17 was greater than great. Even now I sit in awe of it, trying to do the impossible–that is, describe it. It was absolutely stupendous, the ultimately, utmost! I cannot fathom how you could fit so much action into so few pages. It will live forever as one of the greatest F.F. comics ever printed, ergo, as one of the greatest of ALL comics. In what other comic mad could you see things like a hero falling down a manhole, a heroine mistaking a toy inventor for a criminal, and the President of the U.S.A. leaving a conference that may determine the fate of the world to put his daughter to bed. The epic story, spectacular and exciting as it is, is not all that made this mag so great. The letter column was top-notch, too. I nearly died when I saw Paul Gambaccini’s letter. You’ve really made him change his tune; that letter was a far cry from the one printed in F.F. #9. Then there’s your cover boast–THE WORLD’S GREATEST COMIC MAGAZINE! Brilliant! You were just about the World’s worst mag when you started, but you set yourself an ideal, and, by gumbo, you achieved it! More than achieved it, in fact–why, if you were only half as good as you are now, you’d still be the world’s best mag!!!