Witnify » [Text] The Spanish Flu: A Letter Between Physicians

[Text] The Spanish Flu: A Letter Between Physicians

“We have been averaging about 100 deaths per day, and still keeping it up. There is no doubt in my mind that there is a new mixed infection here, but what I don’t know.” 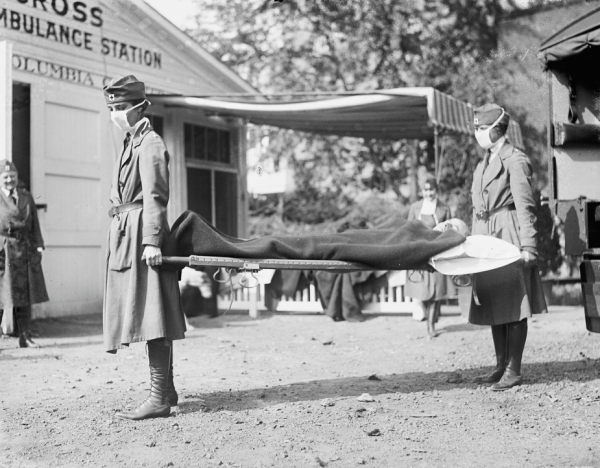 Red Cross in Washington, D.C. during the influenza pandemic. (1918). Source: Library of Congress.

This letter from a physician stationed at Camp Devens, Massachusetts, to a fellow physician friend, describes the overwhelming task of trying to care for and combat a disease whose identity he still did not know.

The letter describes in detail the symptoms of patients, the workload of the doctors, and the accommodations made for the deceased:

It is more than likely that you would be interested in the news of this place, for there is a possibility that you will be assigned here for duty, so having a minute between rounds I will try to tell you a little about the situation here as I have seen it in the last week.

As you know, I have not seen much pneumonia in the last few years in Detroit, so when I came here I was somewhat behind in the niceties of the Army way of intricate diagnosis. Also to make it good, I have had for the last week an exacerbation of my old ‘Ear Rot’ as Artie Ogle calls it, and could not use a stethoscope at all, but had to get by on my ability to ‘spot’ ‘em thru my general knowledge of pneumonias…

Camp Devens is near Boston, and has about 50,000 men, or did have before this epidemic broke loose. It also has the base hospital for the Division of the Northeast. This epidemic started about four weeks ago, and has developed so rapidly that the camp is demoralized and all ordinary work is held up till it has passed. All assemblages of soldiers taboo. These men start with what appears to be an attack of la grippe or influenza, and when brought to the hospital they very rapidly develop the most viscous type of pneumonia that has ever been seen. Two hours after admission they have the mahogany spots over the cheek bones, and a few hours later you can begin to see the cyanosis extending from their ears and spreading all over the face, until it is hard to distinguish the coloured men from the white. It is only a matter of a few hours then until death comes, and it is simply a struggle for air until they suffocate. It is horrible. One can stand it to see one, two or twenty men die, but to see these poor devils dropping like flies sort of gets on your nerves. We have been averaging about 100 deaths per day, and still keeping it up. There is no doubt in my mind that there is a new mixed infection here, but what I don’t know. My total time is taken up hunting rales, rales dry or moist, sibilant or crepitant or any other of the hundred things that one may find in the chest, they all mean but one thing here — pneumonia — and that means in about all cases death. 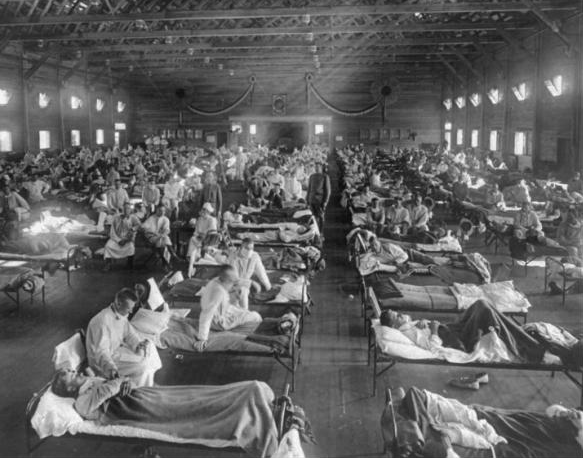 Influenza victims in a hospital near Fort Riley, Kansas (1918). Source: The Associated Press.

The normal number of doctors here is about 25 and that has been increased to over 250, all of whom (of course excepting me) have temporary orders — ‘Return to your proper station on completion of work’ — Mine says, ‘Permanent Duty,’ but I have been in the Army just long enough to learn that it doesn’t always mean what it says. So I don’t know what will happen to me at the end of this. We have lost an outrageous number of nurses and doctors, and the little town of Ayer is a sight. It takes special trains to carry away the dead. For several days there were no coffins and the bodies piled up something fierce, we used to go down to the morgue (which is just back of my ward) and look at the boys laid out in long rows. It beats any sight they ever had in France after a battle. An extra long barracks has been vacated for the use of the morgue, and it would make any man sit up and take notice to walk down the long lines of dead soldiers all dressed up and laid out in double rows. We have no relief here; you get up in the morning at 5:30 and work steady till about 9:30 p.m., sleep, then go at it again. Some of the men of course have been here all the time, and they are tired.

If this letter seems somewhat disconnected overlook it, for I have been called away from it a dozen times, the last time just now by the Officer of the Day, who came in to tell me that they have not as yet found at any of the autopsies any case beyond the red hepatitis stage. It kills them before it gets that far.

I don’t wish you any hard luck Old Man, but do wish you were here for a while at least. It’s more comfortable when one has a friend about. The men here are all good fellows, but I get so damned sick o’ pneumonia that when I eat I want to find some fellow who will not ‘talk shop’ but there ain’t none, no how. We eat it, sleep it, and dream it, to say nothing of breathing it 16 hours a day. I would be very grateful indeed it you would drop me a line or two once in a while, and I will promise you that if you ever get into a fix like this, I will do the same for you.

Each man here gets a ward with about 150 beds (mine has 168), and has an Asst. Chief to boss him, and you can imagine what the paper work alone is — fierce — and the Government demands all paper work be kept up in good shape. I have only four day nurses and five night nurses (female) a ward-master, and four orderlies. So you can see that we are busy. I write this in piecemeal fashion. It may be a long time before I can get another letter to you, but will try.

‘God be with you till we meet again’