Woodstock Festival of 1969
Photojournalist Among a Hippie Tribe at Woodstock

“I had not been a fan of hippies. I had seen them living sloppily on one or two dollars a day in places like Marrakesh. But they understood the futility, injustice, and cruelty of war. They knew that you could not buy happiness with money. They lived with open arms. At Woodstock I started seeing them differently.” 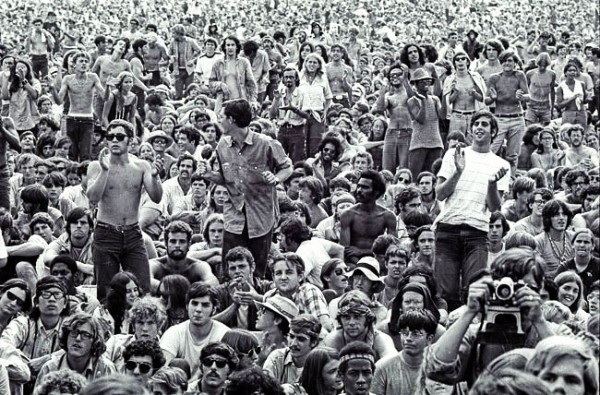 I was showing my photographic portfolio to Business Week magazine’s photo editor one day in 1969 when he said, “Would you like to photograph a rock concert? It will take place tomorrow in Bethel, New York.”

I had never photographed rock concerts. I didn’t even have a clear idea of what a rock concert was. I photographed mostly wild people in wild environments, from deserts to rain forests, for such magazines as National Geographic. But I never turned down an assignment. I did the right thing, for at Woodstock I would photograph wild people too.

I realized this as soon as I arrived, driven by the reporter who would write the story. We found the traffic backed up several miles. Young people crowded over vehicles that included psychedelically painted buses and vans, none of which were moving anymore. There was no way of knowing how long we would be stranded, so I got out of the car to start shooting. I told the writer I would be back in a few minutes.

The traffic did not move another inch for the rest of the August-15-to-18 extended week end. And the chaos did not allow me to find the car again. My luggage, which included much of my film, would unfortunately remain out of my reach the whole time. So I spent the next four days carrying nothing more than a small camera bag with only a dozen rolls of black-and-white film–what the editor had asked me to use. This forced me to think at least twice before shooting a picture, lest I run out of film before the end.

Now, 44 years later, and though I must be one of the few who was not touching marijuana, I can’t remember some things, as for example where and how I slept during those few nights, even though the driving rainstorms should have made the memory indelible. But then, with so many memorable experiences cramming my small brain, this one may just not have found room enough for itself.

But I do remember how ill-equipped I was for this particular adventure. I carried no tent, no sleeping bag or blanket, no jacket, or even a sweater. In the rain forests of the Amazon and Borneo it was hot. And I had always been able to get into dry clothes at the end of the day. And at night I had thrown a sheet of plastic over my hammock. But at Woodstock, day and night, for much of the four days, I had to walk around and sleep in soaking wet shirt and jeans and muddy shoes. I did not eat much either, for there was not much food to buy and lines were endless at the makeshift stands.

But what an amazing spirit there was. How contagious love was. The kids hailed me as “brother” and begged me to smoke pot with them. And then there was the music, nearly non-stop.

Thanks to my photographs there are things that I remember more clearly. Santana’s band, for example, though not the many other musicians, as I focused my attention on the mind-boggling crowd, acting nearly as insanely as the musicians. The thousands of young men and women whose faces radiated as if they had just seen Jesus Christ himself. The stoned naked man who hung high on a music tower to better expose himself. The sleepers packed at night like canned sardines. The restless men who kicked the sleepers’ shoes away from them as they walked around. And then, the morning after a night’s rain, the kids who kept trying to keep sleeping to delay the moment they would have to deal with their wet muddy situation (hundreds later abandoned their blankets and sleeping bags stuck under the mud). And the many who at the end were forced to walk back shoeless to their cars.

I had not been a fan of hippies. I had seen them living sloppily on one or two dollars a day in places like Marrakesh. But they understood the futility, injustice, and cruelty of war. They knew that you could not buy happiness with money. They lived with open arms. At Woodstock I started seeing them differently. And now that greed has plunged the world into misery, I can’t help thinking that we were better off with the hippies. At least they owned some truths. And they were so much more human than the financial predators that left us wondering what future we may still have.

Victor Englebert is a photojournalist exploring world cultures. He has appeared in magazines including National Geographic and Smithsonian Magazine. Learn more about his work on his blog and website.