On January 12, 1969, Joe Namath and the New York Jets defeated Johnny Unitas and the Baltimore Colts by a score of 16-7. The New York Jets, who were part of the American Football League (AFL) were heavy underdogs. Their win was the first for an AFL team in the … Continue reading

Fans of both the Seattle Seahawks and San Francisco 49ers football teams react differently to the game ending interception that sent the Seahawks to the Super Bowl. The January 19, 2014 NFC Championship game pitted the two rival teams against each other at Seattle’s CenturyLink Field. Trailing by 4 points … Continue reading

Condoleezza Rice served as the 66th United States Secretary of State under George W. Bush, becoming the first female African-American to hold the position. While she is well known for her role in shaping global politics, Rice also has a deep love for the National Football League. In this video, … Continue reading

In 1960, the American Football League (AFL) was created and its existence challenged the dominance and popularity of the already established National Football League (NFL). The two leagues competed for players, creating ill will. When Joe Namath was given a $400,000 contract with the New York Jets in 1965, salaries … Continue reading

Former Green Bay Packer Jerry Kramer talks about the legend that was Vince Lombardi and the character traits that made him one of the most lauded coaches in the history of the NFL. Kramer recalls Coach Lombardi’s high expectations: “He was an incredibly demanding, difficult human being, and I think … Continue reading 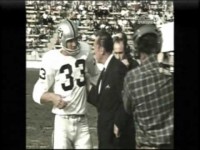 Football player Kenny Stabler shares his memories of the time he spent playing for the Oakland Raiders and shares his thoughts on owner Al Davis.