Footage from 1967 of Thurgood Marshall’s appointment as the the first African-American Associate Justice on the U.S. Supreme Court. Marshall was confirmed by a Senate vote of 69–11 on August 30, 1967; in this video, members of the U.S. Senate give their feedback on the historic confirmation. 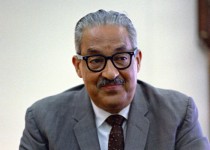 Stephen Carter, former clerk of Justice Thurgood Marshall in 1980, shares a story on how Marshall would never say a negative thing about someone, including the segregationists that he effectively dedicated his legal career opposing. Carter describes a time when one particular segregationist lawyer’s name came up and instead of … Continue reading