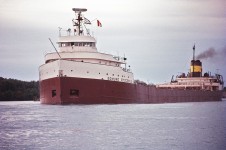 Hear the final radio transmissions from the SS Edmund Fitzgerald which sank in a Lake Superior storm on November 10, 1975. The ship sank along with its entire crew of 29. The wreck was immortalized in the Gordon Lightfoot song–”The Wreck of the Edmund Fitzgerald.” When the ship launched on … Continue reading