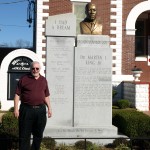 Over the years I have recalled many times these prophetic words spoken to me with serene dignity in private conversation, by Coretta Scott King, wife of Dr. Martin Luther King. At the time, Coretta, Rev. John Porter, and I were sharing a plane ride from Montgomery, Alabama to Atlanta, Georgia on the evening of Sunday, March 16, 1965. It was the end of the first day of the Selma to Montgomery March. Dr. King, as we all know, was gunned down by an assassin three years later on March 29, 1968.

Coretta, whose home had been bombed during the Montgomery Bus Boycott in 1955, was herself an amazingly courageous woman, risking her own life many times to walk by Martin’s side. We had both marched that day, along with almost 8,000 others, made up mostly of African Americans, but with a sprinkling of white clergy from around the country mixed in. As the four lane road between Selma and Montgomery narrowed to two, only three hundred marchers were allowed by the court to continue toward Montgomery. Most of the rest of us returned to Selma and some of us headed home. When we shared that plane ride, Coretta was returning to her family in Atlanta, and I was on my way back to my family and church in the stockyards area of Chicago.

My journey had begun two weeks earlier on Sunday March 7, which has come to be known in Civil Rights history as “Bloody Sunday.”  On that day I watched the television in horror and disgust as white law enforcement officers and deputies mercilessly beat and tear gassed a non-violent group of 600 African Americans as they marched across the Edmund Pettus Bridge in Selma. I knew in that moment that God was sending me to Selma that week.

On Tuesday, March 9, Dr. King led a somewhat larger group to the same bridge, but they turned around before there could be another confrontation. That evening, a friend of mine, Rev Jerry Forshey, who had participated in the Tuesday march, was in downtown Selma at a drugstore along with Rev. James Reeb, a white Unitarian Universalist minister. While Jerry was talking with someone in the store, Reeb left, intending to walk a few blocks back to the African American community. Reeb was surrounded by a group of men and beaten to death. 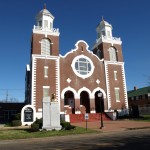 I arrived in Selma on Thursday. On Saturday, around 150 of us marched through the Selma mayor’s neighborhood to protest the publicly sanctioned violence toward the protestors. Along the way people threatened us with curses and guns. Some of our group were viciously assaulted. We were arrested and herded into school buses where our bodies were packed together so tightly it was difficult to breathe. We were driven to the jail where we were required to stand outside in the hot sun for over two hours. There was no room in the jail so we were led to a community facility for incarceration. After a sleepless night in which we feared the Ku Klux Klan would bomb our temporary prison, our guards disappeared and we marched uneasily back to the movement headquarters at Browns Chapel Church.

On Tuesday, March 16, thousands assembled outside the church. Communion was served and Dr. King spoke. Now protected by Federal injunction and national guardsmen, we began to march through the streets and across the Edmund Pettus Bridge toward Montgomery. After several miles of marching, the majority of us returned to Selma.

That night a kind African American older couple risked their lives to drive me to the airport in Montgomery. I lay covered by a blanket on the floorboard of the backseat of their car. If my white face had been seen by members of the Klan, we would all have likely been killed. Only a few days later, Klan members killed civil rights volunteer Viola Liuzzo on that same road.

And so I found myself sitting with Coretta on that plane ride to Atlanta. It is difficult today for us to understand the animosity that existed then. I have never before or since heard the level of vile language, or seen the kind of hatred in people’s eyes, that I witnessed coming from the white people, many of them no doubt active church members, lining the streets of Selma during the marches.

The Selma to Montgomery march touched the conscience of America. Selma was about voting rights for African Americans in the South. Through a variety of strategies, including poll taxes, voter registration fraud, and violence, African Americans in the 1960s were denied the right to vote. Selma was the catalyst that made possible the Civil Rights Act, which was introduced in Congress on March 17, 1965.

The right to vote is a right of every adult American citizen. It has been paid for by every soldier who ever fought for our country, and by every civil rights worker who died or risked beatings and death to end voter discrimination. No matter what our politics, we must never ever allow any group of people, especially elected representatives, to hinder and deny the legitimate rights of American citizens to exercise their right to vote.