“I will never be the same after yesterday, in ways that I cannot foresee…” 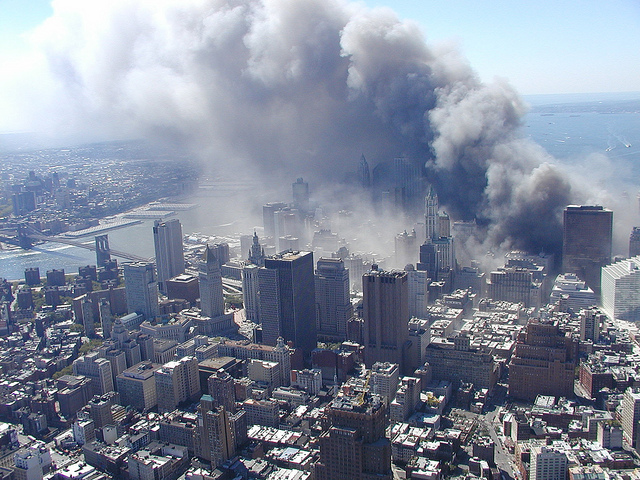 Firsthand account of the WTC attacks and subsequent evacuation from Lower Manhattan residence. A heavily forwarded e-mail that became the subject of an article in the Wall Street Journal a week later on the widespread use of the web to communicate the tragic news of the day:

“My entire family is safe. We evacuated our lower-Manhattan residence at about noon yesterday and migrated north on foot to Grand Central Terminal (about three miles) where we took Metro North to the home of my parents in Westchester, from where I write this message.

We live four blocks from the World Trade Center, in view of both Towers, City Hall, and City Hall Park. I happened to be working at home yesterday. My wife went to work at 8:20AM. I left at the same time to vote in NYC’s Mayoral Primary. My 9-month old son was at home with our nanny. My 5-year old daughter was attending her second day of Kindergarten at PS-234, three blocks from World Trade Center. Lineup time in the yard was 8:40AM in full view of WTC 1.

When the first plane hit at 8:50, they evacuated the school without incident. I noticed WTC 1 on fire in a high floor upon returning from voting, about 8:55AM. Large crowds of onlookers were gathering along the base of City Hall Park as countless fire engines, police cars, and ambulances screamed past.

I went home, grabbed my camcorder, went out to the street and started filming. I consider myself to be emotionally strong. What I bore witness to, however, was especially upsetting, with indelible images of horror that will not soon leave my mind.

1) I first see WTC 1 on fire at a high floor. Not just flames coming out of some windows, but four or five entire floors on fire with smoke penetrating floors still higher.

2) Among the papers and melted steel fragments fluttering to the ground, I notice that some debris was falling distinctly differently. These weren’t parts of the building that were falling. These were people, jumping from the windows, their bodies tumbling in rapid descent from the eightieth floor. I noticed about ten such falls, morbidly capturing three of them on tape.

3) A fiery explosion burst forth from a corner of WTC 2 about two thirds of the way up, perhaps the 60th floor. The fireball created an intense radiative impulse of heat from which we all had to turn our heads. From my vantage point, I could not see the plane that caused it, which hit 180 degrees on the other side of the building. Nor did I know at the time that a plane caused it. I first thought it was a bomb, but the explosion was not accompanied by the tell-tale acoustic shockwave that rattles windows. This was simply a low frequency rumble.

As it burst from the building’s corner, the fireball was so large that it extended all the way across to WTC 1. The fact the building’s corner exploded tells me that the ignited jet fuel got focused by the sides of the floor into which the second plane flew, meeting at the corner with increased explosive pressure. The flames were accompanied by countless thousands of sheets of paper that burst forth, fluttering to the ground as though every filing cabinet on multiple floors was emptied.

The fact that the second tower was now on fire made it clear to us all on the street that the first fire was no accident and that the WTC complex was under terrorist attack. Morbidly, I have the explosion on tape and the sounds from the horrified crowd surrounding me. At this point I stopped filming, and went back inside my apartment.

4) As more and more and more and more and more emergency vehicles descended on the World Trade Center, I hear a second explosion in WTC 2, then a loud, low-frequency rumble that precipitates the unthinkable—a collapse of all the floors above the point of explosion. First the top surface, containing the helipad, tips sideways in full view. Then the upper floors fall straight down in a demolition-style implosion, taking all lower floors with it, even those below the point of the explosion. A dense, thick dust cloud rises up in its place, which rapidly pours through the warren of streets that cross lower Manhattan.

I close all our windows and blinds. As the dust cloud engulfs my building, an eerie darkness surrounded us—the kind of darkness you experience before a severe thunderstorm. I look out the window and can see no more than about 12 inches away.

5) Outside my window, after about 15 minutes, visibility grows to about 100-yards, and I notice about an inch white dust everywhere outside my window. That’s when I realize that every single rescue vehicle that had parked itself at the base of the World Trade Center must now be buried under 110 collapsed floors of tangled debris, and multiple feet of dust. This collapse took out the entire first round of rescue efforts including what were surely hundreds of police officers, firefighters, and medics.

As visibility increased and I could now see the blue sky, there was blue sky where WTC 2 used to be.

6) I decide it’s time to get my daughter, who was taken by the parents of a friend of hers to a small office building, six blocks farther from the WTC than my apartment. As I dress for survival: boots, flashlight, wet towels, swimming goggles, bicycle helmet, gloves, I hear another explosion followed by a now all-too familiar rumble that signaled the collapse of WTC 1, the first of the two towers to have been hit. I saw the iconic antenna on this building descend straight down in an implosion twinning the first.

This dust cloud was darker, thicker and faster-moving than the first. When this round of dust reached my apartment, fifteen seconds after collapse, the sky turned dark as night, with visibility of no more than about a centimeter. It was getting harder to breathe in the apartment, but we were stable.

At this point I offer no hope of survival for any of the rescue personnel who were on the scene.

7) The cloud settles once again, now leaving a total of about three inches of dust outside my window. Another dark cloud of smoke now occupies the area where two 110-story buildings once stood. This cloud, however, was not the settling kind. It was smoke from ground-level fires. At this time the air in the apartment is getting harder and harder to breathe and it becomes clear that we should evacuate—especially with the likelihood of underground gas leaks. I load up my largest backpack with survival items, put my son in our most nimble stroller and leave with our nanny, who then walks across the Brooklyn Bridge toward her home.

I go to where my daughter was held, which was upwind from all debris on a quiet street. She is in good spirits, but clearly upset. I have a crayon drawing of hers, sketched while waiting for me to arrive, which shows the Twin Towers with smoke and fire coming from them, as only a 5-year old could draw. Daddy, why do you think the pilot drove his plane into the World Trade Center? Daddy, I wish this was all just a dream. Daddy, if we can’t return home tonight because of all the smoke, will my stuffed animals be okay?

8) From the calm of an upholstered couch in the office where my daughter was kept, with my son under one arm and my daughter under the other, I realize that, fully loaded, each tower of the WTC holds 10,000 people. From what I witnessed, I have no reason to believe that any of them survived. In fact, I would not be surprised if the death toll reached 25-30,000. Beneath the Towers is an entire universe of six subterraneous levels containing scores of subway platforms, plus a hundred or so shops and restaurants. The Towers simply collapsed into this hole—a hole large enough to have supplied the landfill for the World Financial Center across the West Side highway from the World Trade Center.

9) I realize that if the death toll is as high as I suspect, this incident is much, much worse than Pearl Harbor, where several thousand people died. It’s more spectacularly tragic than the Titanic, the Hindenburg, Oklahoma City, car bombs, and airplane hijackings. The number of deaths in one four-hour period will be nearly half of the American death toll in all of Vietnam.

I reconnected with my wife by 4PM, meeting her just north of Union Square Park, before we hiked another mile north to Grand Central Terminal for our ride to Westchester, above New York City.

I will never be the same after yesterday, in ways that I cannot foresee. I suppose that my generation now joins the ranks of those who lived through unspeakable horrors and survived to tell about it. How naive I was to believe that the world is fundamentally different from that of our ancestors, whose lives were changed by bearing witness to the 20th century’s vilest acts of war.

Peace to you all

To view more of his work, visit his website here.