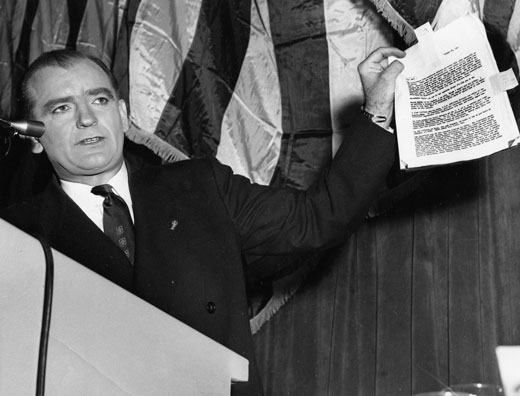 Senator Joseph McCarthy sent a telegram to President Harry S. Truman on February 11, 1950, two days after giving a speech in Wheeling, West Virginia that claimed more than 200 members of the State Department were card-carrying members of the Communist party. In his telegram, McCarthy reiterates that he has names of communist employees in the State Department, and asks the president to provide Congress with a “full accounting of Communist infiltration.” In his reply, which was probably never sent, Truman responds that McCarthy is “not even fit to have a hand in the operation of the Government of the United States”–a biting response. Read the full exchange below.

In a Lincoln Day speech at Wheeling Thursday night I stated that the State Department harbors a nest of communists and communist sympathizers who are helping to shape our foreign policy. I further stated that I have in my possession the names of 57 communists who are in the State Department at present. A state department spokesman [ripped text] denied this and claimed that there is not a single communist in the department. You can convince yourself of the falsity of the State Department claim very easily. You will recall that you personally appointed a board to screen state department employees for the purpose of weeding out fellow travelers. Your board did a pains-taking job. And named hundreds which it listed as “dangerous to the security of the nation”, because of communistic connections.

While the records are not available to me, I know [ripped text] that of one group of approximately 300 certified to the Secretary for Discharge, he actually discharged only approximately 80. I understand that this was done after lengthy consultation with Alger Hiss. I would suggest therefore, Mr. President, that you simply pick up your phone and ask Mr. Acheson how many of those whom your board had labeled as dangerous, he failed to discharge. The day the House Un-American Activities Committee exposed Alger Hiss as an important link in an inter-national communist spy ring, you signed an order forbidding the State Departments giving to the Congress any information in regard to the disloyalty or the communistic connections of anyone in that department, dispite [sic] this State Department blackout, we have been able to compile a list of 57 communist in the State Department. This list is available to you, but you can get a much longer list by ordering the Secretary Acheson to give you a list of these whom your own board listed as being disloyal, and who are still working in the State Department. I believe the following is the minimum which can be expected of you in this case

(1) That you demand that Acheson give you and the proper congressional committee the names and a complete report on all of those who were placed in the department by Alger Hiss, and all of those still working in the State Department who were listed by your board as bad security risks because of the communistic connections.

(2) That under no circumstances could a congressional committee obtain any information or help from the executive department in exposing communists.

Failure on your part will label the Democratic Party of being the bed-fellow of inter-national communism. Certainly this label is not deserved by the hundreds of thousands of loyal American democrats throughout the nation, and by the sizable number of able loyal democrats in both the Senate and the House.

To see the original photos of the telegram, and President Truman’s response, visit the website of the National Archives of the United States.