On May 20, 1927 aviator Charles Lindbergh took off from Roosevelt Field, Long Island and successfully made the first solo flight across the Atlantic when he safely landed in France at the Le Bourget Field on May 21, 1927. 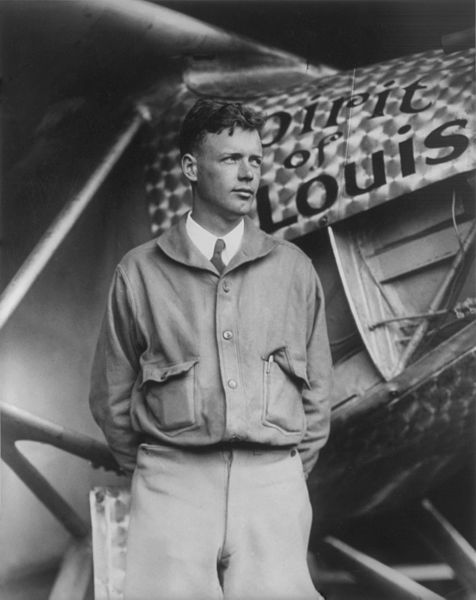 The field was a little soft due to the rain during the night and the heavily loaded plane gathered speed very slowly. After passing the halfway mark, however, it was apparent that I would be able to clear the obstructions at the end. I passed over a tractor by about fifteen feet and a telephone line by about twenty, with a fair reserve of flying speed. I believe that the ship would have taken off from a hard field with at least five hundred pounds more weight.

I turned slightly to the right to avoid some high trees on a hill directly ahead, but by the time I had gone a few hundred yards I had sufficient altitude to clear all obstructions and throttled the engine down to 1750 R.P.M. I took up a compass course at once and soon reached Long Island Sound where the Curtiss Oriole with its photographer, which had been escorting me, turned back.”

“Darkness set in about 8:15 and a thin, low fog formed over the sea through which the white bergs showed up with surprising clearness. This fog became thicker and increased in height until within two hours I was just skimming the top of storm clouds at about ten thousand feet. Even at this altitude there was a thick haze through which only the stars directly overhead could be seen.

There was no moon and it was very dark. The tops of some of the storm clouds were several thousand feet above me and at one time, when I attempted to fly through one of the larger clouds, sleet started to collect on the plane and I was forced to turn around and get back into clear air immediately and then fly around any clouds which I could not get over.”

“The first indication of my approach to the European Coast was a small fishing boat which I first noticed a few miles ahead and slightly to the south of my course. There were several of these fishing boats grouped within a few miles of each other.

I flew over the first boat without seeing any signs of life. As I circled over the second, however, a man’s face appeared, looking out of the cabin window.

I have carried on short conversations with people on the ground by flying low with throttled engine, and shouting a question, and receiving the answer by some signal. When I saw this fisherman I decided to try to get him to point towards land. I had no sooner made the decision than the futility of the effort became apparent. In all likelihood he could not speak English, and even if he could he would undoubtedly be far too astounded to answer. However, I circled again and closing the throttle as the plane passed within a few feet of the boat I shouted, “Which way is Ireland?” Of course the attempt was useless, and I continued on my course.

Less than an hour later a rugged and semi-mountainous coastline appeared to the northeast. I was flying less than two hundred feet from the water when I sighted it. The shore was fairly distinct and not over ten or fifteen miles away. A light haze coupled with numerous storm areas had prevented my seeing it from a long distance.

The coastline came down from the north and curved towards the east. I had very little doubt that it was the southwestern end of Ireland, but in order to make sure I changed my course towards the nearest point of land.

I located Cape Valencia and Dingle Bay, then resumed my compass course towards Paris.”

“The sun went down shortly after passing Cherbourg and soon the beacons along the Paris-London airway became visible.

I first saw the lights of Paris a little before 10 P.M., or 5 P.M., New York time, and a few minutes later I was circling the Eiffel Tower at an altitude of about four thousand feet.

The lights of Le Bourget were plainly visible, but appeared to be very close to Paris. I had understood that the field was farther from the city, so continued out to the northeast into the country for four or five miles to make sure that there was not another field farther out which might be Le Bourget. Then I returned and spiralled (sic) down closer to the lights. Presently I could make out long lines of hangars, and the roads appeared to be jammed with cars.

I flew low over the field once, then circled around into the wind and landed.”

To read more about Charles Lindbergh visit Eyewitness to History.