John Hay, one of President Lincoln’s private secretaries, describes the scene as the presidential party arrives in Gettysburg and the famous speech: 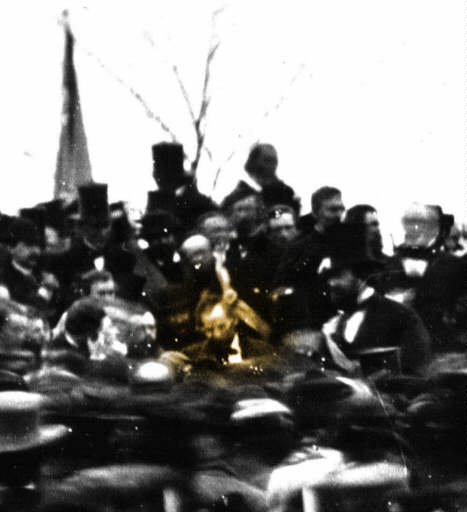 “At Gettysburg, the President went to Mr. Wills who expected him, and our party broke like
a drop of quicksilver spilled. MacVeagh [Chairman of the Pennsylvania Republican Party], young Stanton [Son of Lincoln's Secretary of War], and I foraged around for awhile – walked out to the college, got a chafing dish of oysters then some supper, and finally loafing around to the Court House where Lamon [Chief Marshall of the event and a close friend of Lincoln's]was holding a meeting of marshals, we found Forney [a reporter]and went around to his place, Mr. Fahnestock’s, and drank a little whisky with him.

He had been drinking a good deal during the day and was getting to feel a little ugly and dangerous. He was particularly bitter on Montgomery Blair [Lincoln's Postmaster General]. MacVeagh was telling him that he pitched into the Tycoon [Hay's nickname for Lincoln]coming up, and told him some truths. He said the President got a good deal of that from time to time and needed it…

We went out after a while following the music to hear the serenades. The President appeared at the door and said half a dozen words meaning nothing and went in. Seward [Lincoln's Secretary of State] , who was staying around the corner at Harper’s, was called out, and spoke so indistinctly that I did not hear a word of what he was saying

We went back to Forney’s room, having picked up Nicolay [another of Lincoln's private secretaries], and drank more whisky. Nicolay sang his little song of the ‘Three Thieves,’ and we then sang ‘John Brown.’ At last we proposed that Forney should make a speech and two or three started out, Shannon and Behan and Nicolay, to get a band to serenade him. I stayed with him. So did Stanton and MacVeagh…I walked downstairs with him.

The crowd was large and clamorous. The fuglers [military guards]stood by the door in an agony. The reporters squatted at a little stand in the entry. Forney stood on the threshold, John Young [a reporter] and I by him.

The crowd shouted as the door opened. Forney said, ‘My friends, these are the first hearty cheers I have heard tonight. You gave no such cheers to your President down the street. Do you know what you owe to that great man? You owe your country – you owe your name as American citizens.’

In the morning I got a beast and rode out with the President’s suite to the Cemetery in the procession. The procession formed itself in an orphanly sort of way and moved out with very little help from anybody, and after a little delay, Mr. Everett took his place on the stand – and Mr. Stockton made a prayer which thought it was an oration; and Mr. Everett spoke as he always does, perfectly – and the President, in a fine, free way, with more grace than is his wont, said his half dozen words of consecration, and the music wailed and we went home through crowded and cheering streets.”

Read the rest at the Eye Witness History website.