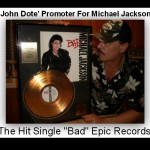 JOHN DOTE’ AND MICHAEL JACKSON “HISTORY” FROM CBS NEWS
John Dote’ is officially in the Michael Jackson history books. A true legend in the music industry as a record promoter and recording producer.

The world has lost an amazing talent. Michael Jackson never left his childhood. (CBS) — Michael Jackson, the show-stopping singer whose best-selling albums — including “Off the Wall,” “Thriller” and “Bad” — and electrifying stage presence made him one of the most popular artists of all time, died on a Wednesday, according to multiple sources, including the Los Angeles Times and The Associated Press. Record promoter John Dote’ remembers the “king of pop” all to well. It was during the 80′s when Dote’ had produced t.v. themes including Dynasty and Dallas and was approached by Michael’s father Joe Jackson to promote the “Bad” album on Epic Records. Michael and John became close friends. They spent quite a bit of time at the Jacksons residence in Encino, California. During that time on mothers day, John and Michael wanted to surprise Michael’s mother. They went to Terry York Rolls Royce dealership in L.A. to purchase a brand new Rolls Royce which was white and they tied a bow and placed it on the hood of the car. They drove it back to Jackson’s home and they invited Catherine Jackson out to the driveway to give her a mothers day gift. But she did not like the color. So they drove back to the dealership and picked out a red Rolls. When they presented it to mother Jackson she was “thrilled”.

According to Dote’, the death of Michael Jackson was a “hoax” and he has the evidence to share with the world. While Elvis’ death was also publisized as a “Hoax” and is living somewhere in New Zealand or possibly Nova Scocia, Dote’, Jackson’s former record promoter for the album “Bad” has dug deep into the death of the legendary entertainer himself. And this is what he found. ♫ Michael Jackson Death Hoax Investigators ♫ . You will find this to be the most powerful and fascinating story of the “King Of Pop”. It will literally leave the hairs on your body standing. Dote’ was tipped off by an Anonymous emailer. Dote’ is best known as the drummer from the t.v. hit series “Hawaii Five-0” and the theme from the motion picture “Rocky”.

You will learn that Michael Jackson is not dead, he’s alive. And he will come back. Soon he will be in the spot light again. He will then wake up humanity with his message: the world is about to be controlled by a secret society or worse, the Antichrist.