According to the-numbers.com, in 2013, computer-animated movies earned over $1.6 billion at the box office. Ten digitally animated films topped the $50 million mark. 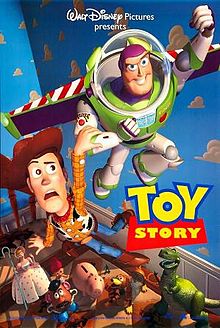 The first digitally animated movie was released in 1995. Due to the extremely long lead time needed to create the vast number of digital pixels in a feature film, it wasn’t until 1998 that the public got to see another digitally animated movie with “Antz” and “A Bug’s Life” both coming out that fall. “Toy Story 2” was the only computer-animated film in 1999, and 2000 saw zero such movies. Anything digital was automatically an event movie in those early days of the technology.

It’s a remarkable testament to Pixar that the company married its new technology to a clever script of engaging characters. In fact, many of the the reviews of Pixar’s first film, “Toy Story,” from 1995 brush-off the technological advancements while raving about the story-telling:

“Toy Story” pops off the screen with a vibrancy that’s totally unlike traditional hand-painted animation. Harder-edged, with a super-realist sheen, the images have such a tactile, three-dimensional presence that you have to keep reminding yourself they’re not by human hands.
— David Ansen, Newsweek

For the kids in the audience, a movie like this will work because it tells a fun story, contains a lot of humor, and is exciting to watch. Older viewers may be even more absorbed, because “Toy Story,” the first feature made entirely by computer, achieves a three-dimensional reality and freedom of movement that is liberating and new.
— Roger Ebert, Chicago Sun-Times

While 3-D computer-generated images provide the raw materials of this miniature buddy flick — set in a world in which toys have lives of their own — Disney’s unrivaled ability to wed emotional depth to high-tech razzle-dazzle endows “Toy Story” with its authentic heart and soul.
— David Baron, New Orleans Times-Picayune

“Toy Story” is no ordinary kiddie movie. It’s unsentimental, politically incorrect and – barring a couple of superior numbers from Randy Newman — free of those “heartwarming” songs which make animated films such an ordeal for grown-ups. It’s so entertaining, indeed, that adult viewers may be asking themselves, “Can this really have come from the same studio that brought us ‘Pocahontas’?”
— James Delingpole, London Telegraph