“I don’t know very English, but I know as much as write to you…”

Read an amazing letter from a 12-Year-Old Fidel Castro to just recently re-elected President Franklin D. Roosevelt. Castro writes “My very good friend Roosevelt: I don’t know very English, but I know as much to write you.” The future leader of the Cuban Revolution, goes on to casually request a ten spot from the U.S. President:
“If you like, give me a ten dollar bill green american (sic), in the letter, because never, I have not seen a ten dollars green american and I would like to have one them…”
The young Castro goes on to give the President his address and highlight that he may not know English that well, but the President probably doesn’t speak Spanish all that great either. Unclear if Roosevelt ever responded, but have to give the young Cuban some credit. No harm in asking.

Castro developed a famously fraught relationship with the United States during his 52-year period in political office between 1959 and 2011–the Bay of Pigs invasion, the Cuban Missile Crisis, and Castro’s nationalization of United States owned businesses were among the catalysts for the long term antagonism between the two nations. However, the letter to Roosevelt in 1940 reveals that Castro once idolized a leader of the country he grew to detest. In broken english, he even writes that he is “very happy” that Roosevelt “will be President”: 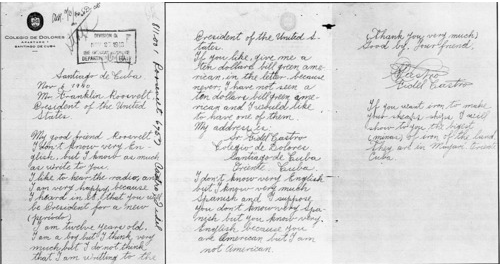 My good Roosvelt
I don’t know very English, but I know as much as write to you.
I like to hear the radio, and I am very happy, because I heard in it, that you will be President a new (periodo)
I am twelve years old.
I am a boy but I think very much, but I do not think that I am writting to the President of the United States.

(Thank you very much)
Good by.  Your friend,
Fidel Castro

If you want iron to make your sheaps ships I will show to you the bigest (minar) of iron of the land.  They are in Mayarí.  Oriente Cuba.”