“Sometime during the questioning I called a German officer a ‘SOB’ and woke up several days later in a hospital with a big headache and a bashed head.”

Joseph Beryle, a U.S. Paratrooper for the 506th Parachute Infantry Regiment, recounts his time as a prisoner of war after making his jump into Saint Come du Mont, France, on D-Day, June 6, 1944. He was believed to have died during the airborne landings but he was instead captured by Germans. Beryle details how he survived and escaped: 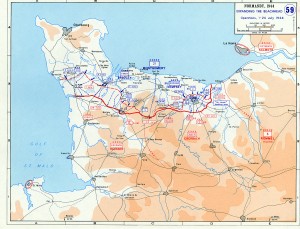 …As my unit prepared for invasion the day after my return to my unit we were alerted to move to a marshaling area at Exeter, England. We were locked in with no outside contact. We made a night parachute drop, assembled, and went back to Ramsbury.

Two weeks later, we went back to the same marshaling area. This time we were told it was France, issued French invasion currency and phrase books and live ammunition and other items, briefed with sand table mockups, told what our mission was in France, given final briefing and issued parachutes. The mission was delayed for a day because of the weather. On the night of June S, 1944 we loaded into C-47s and took off.

The invasion of Normandy was on. We flew approximately 90 minutes from England when we hit the Normandy Peninsula. We started taking AA and ground fire, flying at approximately 700 feet. Several planes were hit and exploded or crashed.

We got the stand-up and hook-up, red light, green light, and jumped at 400 feet and I landed on the church roof at Ste. Come Du Mont, taking fire from church steeple, slid down and made my way through a cemetery surrounding a church, over a wall and headed toward our objective, which was two wooden bridges over the Douave River behind Utah Beach.

The Germans had torched a house in the area where I jumped and were firing at the planes that followed us. Tracer bullets were criss-crossing the sky. Many troopers were hit before landing. I was loose for almost 20 hours in which time I blew a power substation in Ste. Come Du Mont.

Again on Highway 13, I threw grenades into groups of Germans. As I was trying to make my way to the bridges, I crawled over a hedgerow and landed in a German machine gun position manned by 10-12 Germans and was captured. 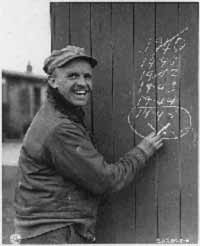 An Allied POW shows the amount of time he has spent within a German “stalag”. Source: U.S. National Archives.

Fortunately, I was captured by German paratroopers. I was stripped of my weapons and I was taken to a German underground HQ in an apple orchard north of Ste. Come Du Mont for interrogation. While being interrogated, I was removed to another underground room, to my surprise, there was a young blond woman setting on the corner of the officer’s desk.

I would give only my name, rank and. serial number per Geneva Convention Rules of War. She proceeded to tell me that she had been in Ramsbury and had danced with, and named, many of my buddies and officers.

After this little game, I was moved to a temporary POW enclosure in another orchard and held until evening and marched along Highway 13 toward Carentan. We started taking artillery fire on the column, killing and wounding GIs and German guards.

This time I took a piece of shrapnel in the left butt, nothing serious and was blown in the ditch along the road. After recovering from the shock, I helped bandage and put tourniquets on two GIs who had their legs blown off. After which we pulled them up on the road and after a German patrol picked them up, I and two others took off into the brush and I became separated from the other two.

After about 12-16 hours, I was recaptured almost the same way as the first capture. I was immediately moved through Carentan and loaded on truck and taken toward St. Lo. As we entered St. Lo, our convoy was strafed by U.S. planes. On the second pass, we were able to evacuate the truck and take cover. Luckily, no one was killed or wounded. We were marched through St. Lo to a horse stable on the road to Tessy.

That night, St. Lo was bombed and the only two things that were not hit were our stable and the church across the road. The next morning when we were marched out, St. Lo was in ruins, with very few buildings standing.

Sometime during the questioning I called a German officer a “SOB” and woke up several days later in a hospital with a big headache and a bashed head and later I was taken back to the monastery.

Seven to ten days later, a group was moved to Alencon, France, about 100-140 miles and held in a compound near a German airfield which was bombed day and night. We were able to volunteer for work details from this camp repairing railbeds.

After we left each evening the U.S. planes would bomb and destroy them. After several days, this work detail was discontinued. These details gave us a chance to get food from Alencon. We were moved to Chartes, France, outside of Paris.

After two weeks in a warehouse with very little food and water, we were dirty and unshaven. We were marched into Paris for propaganda purposes, spit on and pelted with rotten food by the people lining the streets. We were then loaded into “40 and 8″ box cars, 80 men to a car and locked in for 7 days and nights.

With no sanitary facilities available, our health conditions became very serious. On the second day, while moving, we were strafed by planes. Our car was hit and seven to ten men were killed or died later and 20-25 were wounded. The boxcars were not unlocked for five more days, until we reached Stalag XIIA at Limburg, Germany.

Those men who could walk were marched five miles to the camp and held in four big circus type tents, and slept on the ground with straw for a bed. In this camp, we were finally registered as POWs, photographed and given our POW numbers and tags. Mine was XIIA 80213. We were also allowed to write a postcard to our families. 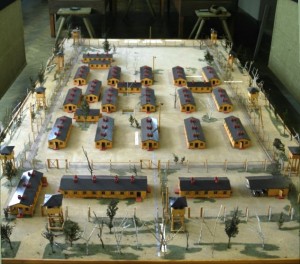 Diorama of a German POW camp.

This was the first time since capture that we were allowed to shave and shower, and even though it was cold water and very little soap, it felt good and raised our morale.

In a week or 10 days, we were on the move again, this time to Stalag IVB, about 40-50 miles south of Berlin. We stayed about a month at IVB, only the non-commissioned officers (NCOs) were moved from XIIA to IVB in compliance with the Geneva Convention rules. These rules state that men are segregated by nationality and rank, officers from NCOs, and NCOs from PFCs and Privates.

On September 17, 1944, we were moved from IVB to IIIC at Alterdrewitz which was outside of Krustin, Poland and 45 miles east of Berlin on the Oder River. We were the first U.S. POWs at this camp, which had about 10,000 Russian POWs, including 200-300 Russian women POWs.

We settled in and organized the camp. The senior U.S. NCO became the commander of the Americans, approximately 1,500 men. We were grouped into Battalions, Companies, and Squads. Security, Escape, Procurement, Administration and Information committees were formed. I was a member of the Escape and Security Committees.

Sometime in early October 1944, while I was out of the compound on work detail, a horse and wagon passed us on the road. It was loaded with potatoes. We all caused confusion and started “liberating” the potatoes when the guards began shooting at us. I was hit in the upper arm and one man fell under the wagon.

The Germans said he was killed when the wagon ran over his head. I managed to cover my wound so it didn’t show and when we were finally taken back to the compound, one of our medics treated me. It was a through and through bullet wound to my upper right arm.

We had a “ferret” in our compound daily. He was a German soldier and his purpose was to roam the compound, barracks and yard and talk to the POWs to try to overhear any useful information. His name was “Schultz” and had served in World War I and was called back into the Army. He was a likable guy and many of the men would play jokes and pranks on him.

He usually took it good, naturally. It came to the attention of the Security and Escape Committees that several escape plans were aborted late in the planning stage because of leaks somewhere in the compound. With further investigations and plants of disinformation it was narrowed down to one person.

After further investigation, he was confronted with the accusations and isolated from the others and interrogated at length. He was charged with treason. A court martial was convened within the compound and after a two day trial, he was found guilty. 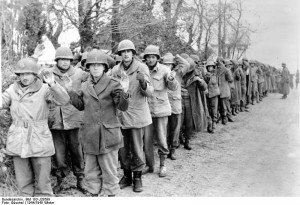 As a traitor, he was sentenced to death. He was executed, his body dismembered and put down the latrines. Records were made and brought out and returned to the USA. After the war, it was determined that he had been infiltrated into the group in the move from IVB to IIIC and that he was a German national.

From the time we reached Limburg XIIA, we received a very limited number of Red Cross food parcels which contained condensed milk, canned meat, cigarettes, and chocolate. Cigarettes became money in POW camps. They were used for barter. I and two other POWs had been talking about how we could escape, and I had won 60 packs of cigarettes in a dice game.

After discussion we came up with a plan which we took to the Escape Committee. It was quite simple. I would offer one of the guards walking outside the barbed wire 10 packs of the cigarettes if he would let us cut the wire while he was walking post and then go through when his replacement was walking post. After several meetings through the wire with him he agreed he would get five packs before and five packs after we escaped.

The escape was planned for early November 1944, when there was no moon. We cut the wire, as planned and went through with no problems. There was a train rail south of the camp, with a light tree area between the camp and rail line.

Each night about the same time between 9-11 p.m. a train pulled through, which our informant told us was going to Poland. We hopped the freight train and rode it to a junction.

Find out what happened next for Joseph Beryle here.