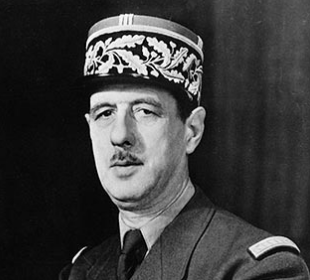 On August 25, 1944, French General Charles de Gaulle entered Paris, which had been liberated the day before. From the Hôtel de Ville, he made a spirited speech to a large crowd with these famous lines, “Paris outraged! Paris broken! Paris martyred! But Paris liberated!” An audio recording of Gaulle’s speech is available below. The English translation of his speech:

Why do you wish us to hide the emotion which seizes us all, men and women, who are here, at home, in Paris that stood up to liberate itself and that succeeded in doing this with its own hands?

Well! Since the enemy which held Paris has capitulated into our hands, France returns to Paris, to her home. She returns bloody, but quite resolute. She returns there enlightened by the immense lesson, but more certain than ever of her duties and of her rights.

I speak of her duties first, and I will sum them all up by saying that for now, it is a matter of the duties of war. The enemy is staggering, but he is not beaten yet. He remains on our soil.

It will not even be enough that we have, with the help of our dear and admirable Allies, chased him from our home for us to consider ourselves satisfied after what has happened. We want to enter his territory as is fitting, as victors.

This is why the French vanguard has entered Paris with guns blazing. This is why the great French army from Italy has landed in the south and is advancing rapidly up the Rhône valley. This is why our brave and dear Forces of the interior will arm themselves with modern weapons. It is for this revenge, this vengeance and justice, that we will keep fighting until the final day, until the day of total and complete victory.

This duty of war, all the men who are here and all those who hear us in France know that it demands national unity. We, who have lived the greatest hours of our History, we have nothing else to wish than to show ourselves, up to the end, worthy of France. Long live France!