The Beatles
Backstage With the Beatles At the ‘Ed Sullivan Show’ 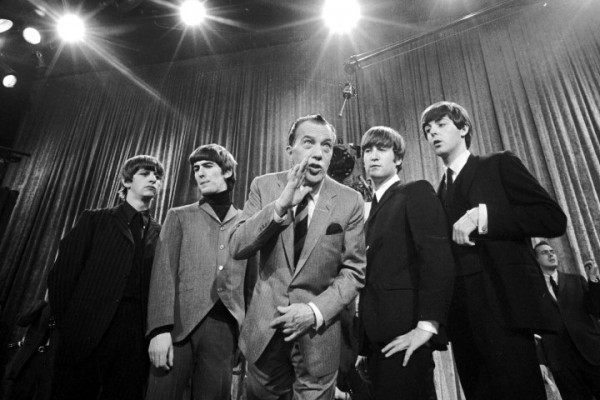 A 50-year old memory keeps me linked with my mother years after her death.

I remember my mother tightly holding my hand, almost pulling me up as we climbed the dimly lit metal stairs. We were on a landing between floors when we ran right into them. They all stopped for a moment, bubbly, euphoric, perhaps a bit startled to find anyone in the stairwell. But I was harmless. At seven years old, I was much younger than the screaming fans in the theater and certainly not old enough to even consider grabbing at their hair or clothes, much less truly comprehend how momentous this was. I had them almost to myself in the recesses of the building that, years later, would be renamed the Ed Sullivan Theater.

“Hello, Julie,” John said with a sweetness that mindboggling stardom hadn’t yet erased. He had quickly read the huge name button pinned to my coat, a fad held over from the ’50s. They were between sets on The Ed Sullivan Show and making their way back to the stage from their dressing room, my mother’s intended destination.

Our personal “Meet The Beatles” mission accomplished, my mother decided we could go back to the wings where we had been standing, hopefully without incident. She had told my father and me that, at the dress rehearsal the day before, Mr. Sullivan yelled at her for getting in the way. Not that she was particularly bothered by it–she just didn’t want a repeat. I had seen the photos many times growing up—my mother, on the stage in her polka dot wool dress and her Jackie Kennedy bouffant, and Ed, his outstretched arm directing her to move along.

My mother had chutzpah, part of her birthright. A writer for a fan magazine that sounded just enough like Ladies Home Journal to get her on press lists, she had no qualms about interviewing anyone and making her way to the head of the line to do so. She had been on a press junket to the White House just days before President Kennedy was assassinated. She was on the tarmac when the Beatles landed and came home with one of their roses.

She was still Rochelle Davis then and her first humor book had just come out, a political parody called “Happiness Is a Rat Fink,” a decidedly dark yet funny riff on Charles Schulz’ bestseller “Happiness Is a Warm Puppy,” with the same hot pink cover. She had already gotten the Beatles to sign a copy for me. Well, John, Paul and Ringo–no George. His absence at the rehearsal hadn’t been explained and, in fact, it took the publication of Bob Spitz’s Beatles biography for me to find out that he had skipped the session to rest a sore throat.

Just 28 years old at the time, she must have been as starstruck by the Fab Four as I was, but she found a way to balance that with the gravitas she probably thought she needed to display as a parent. Thinking back, it seems as though she shared the Beatles with me like a friend would. We were cohorts in this escapade and forever after, no longer just mother and child, a relationship she was less comfortable with.

In the hysteria inside the theater that day, there was no way to actually hear the Beatles perform. So my mother took me to see them at Carnegie Hall a few days later. When she couldn’t scavenge two press seats, she gave me hers, which was on stage right. From my chair, I could hear the Beatles, but see only Ringo’s face and only in profile. The others had their backs to me, their bodies outlined with the glow from all the lights, another image I would never forget.

I wasn’t an innately precocious kid. It was more that my mother exposed me to the world in real time and scale. Not just the Beatles, but also Motown and all of soul music, which would be the subject of her first non-fiction book. She sent me to a French language school so that I wouldn’t be limited by an American-only education (to this day, my husband delights in telling people they can ask me any questions they’d like about 1789, but not to bother with 1776). She soon joined the Congress on Racial Equality and told me about injustice that had to be overcome. Practicing what she preached, she divorced my father after she fell in love with a Black musician and became Rochelle Larkin. We ate at the original Red Rooster when he was playing in Harlem and we kept a map of the United States marked with adhesive dots for every race riot that took place in the ’60s. Soon I had two little brothers and I fought bigotry on our own block, from our super and his kids. Fortunately familiarity bred détente.

I didn’t always appreciate these gifts, the hundreds of moments my mother insisted I share, like taking me to meet Abbie Hoffman in a dark alley so he could give her a manuscript to publish when he was still underground or her giving me my first book assignment when I was 16 because she had moved on to a more exciting project. I had Auntie Mame when I thought I wanted Donna Reed.

Of all our adventures, I always come back to the Beatles. The night before a business meeting some years ago, everyone but me had watched a compilation of the greatest moments on TV. Guess what was number one, my colleague Pete asked. There could only be one right answer. And I was there for it…because of my mother.

Submitted by: Admin
More The Beatles Stories - Total:
Prev
Next