“It has always been my feeling that the Germans were so terrified of the sight of so many ships and so many planes that they weren’t sure who to shoot at.”

The following is an account of D-Day as told by Hubert Mark Altvater, a pilot for the U.S. Army Air Force. Altvater, who flew towards Utah Beach the morning of June 6, 1944, discusses both the orders he and his fellow pilots received, as well as the conditions and events that occurred while in the air.

The name is Hubert Mark Altvater. I was born on October 23, 1921 in a little town named Winfield, Kansas, a town about forty miles south of Wichita. When I was fourteen years old my father accepted a position in Greensborough, North Carolina and that has been my hometown since that time.

An American bomber raining death and destruction down on the Third Reich. Source: U.S. National Archives.

I was a junior at the University of Michigan when Pearl Harbor happened. I finished out my semester at Michigan and returned home to Greensborough, because I knew I would be invited to participate in the global conflict that was fast developing.

On April 28, 1942 I took the examinations for aviation cadet, passed them and was sworn into the U.S. Army Air Force. I was classified as a pilot at the classification center in Nashville, Tennessee. I did my pre-flight training at Maxwell Fields in Montgomery, Alabama, primary flight training at Avon Park, Florida, basic flight training at Bush Field in Augusta, Georgia, and advanced flight training at Turner Field in Albany, Georgia where I graduated as a second lieutenant pilot on June 30, 1943.

I was trained in the B-26 Marauder bomber at Barksdale Field in Shreveport, Louisiana and was sent overseas as a part of a replacement bomber crew on September, 1943. I ended up in the 386th Bomb Group in the 554th Bomb Squadron located at Great Dunmore in Essex County England where I began flying combat missions in February 1944. I was later promoted to first lieutenant and checked out as first pilot.

Our normal practice when I first began flying combat was to fly one mission per day for eight to ten days and then have some time off. Our targets were primarily pilotless aircraft launching sites in the _____ peninsula in ____ area, marshaling yards, aircraft installations, bridges, communication and transportation centers, and fuel dumps. 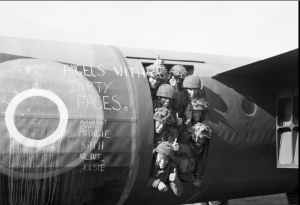 “Angels with dirty faces” –Airborne troops smile from their Horsa glider as they prepare to fly out as part of the second drop on Normandy on the night of D-Day. (June 6, 1944). Source: Imperial War Museums, H 39182.

Later, two missions a day became normal routine. Towards the end of May 1944, we began hearing rumors of an impending attack, but we put little credence into these rumors. We simply spent the first few days of June 1944 flying missions. On the night of June 5, 1944, inspecting officers came around to our huts and checked our pistols, ammunition and knives, we were told nothing except don’t plan on much sleep that night. At about 2:30 a.m. on June 6, 1944 we were rousted out of bed and told to dress and go to breakfast and then report to the briefing room ready to fly.

At the briefing, we were told that we would be hitting coastal gun emplacements on the Normandy beaches and that we would complete the mission regardless of cloud cover. At the time it was pitch dark and raining quite hard but we were dispatched at the aircraft and lined up for takeoff. None of us were used to flying at night, much less in hard rain and low ceiling. We had to assemble by means of colored flares and being unable to see any of the hundreds of B-26′s in the air at approximately the same altitude was a terrifying experience. 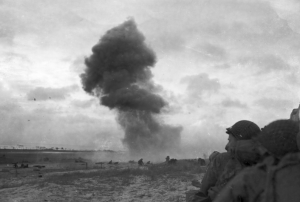 Somehow we got assembled into formation just under the clouds at about 6000 feet over England. It was my 45th mission. We headed south and soon began to lose altitude in staying under the cloud cover. There were eight combat groups of B-26′s involved and we took it as a signal honor that we were chosen to go in last just before the troops hit the beach. Our first mission that day was the Utah beach and we were to bomb the coastal guns at St. Martin ______.

By the time we got to the target and squared away on the bomb run we were at between 800 and 900 feet altitude. My thought at the time was that they could hit us with slingshots and we did sustain considerable small arms and machine gun damage. As we approached our bomb run, two German FW-191 aircraft capped off our right wing at our altitude but never came in. They would not have made it. Each plane in our formation dropped two 1000 pound bombs and my best recollection of looking at my watch was 6:22 a.m.

After the bomb run, instead of turning left and going back over the Channel, which was packed with assault craft and which would have been our normal path, we turned right and flew over the Cherbourg Peninsula and came back to England from the southwest. Our group flew four missions that day and I flew the first and third. The third mission was to bomb the coastal guns at ________, which we did. 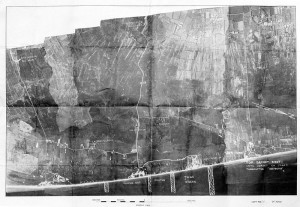 My particular group sustained damage but no losses that day and it has always been my feeling that the Germans were so terrified of the sight of so many ships and so many planes that they weren’t sure who to shoot at. I continued flying missions after D-Day and I was shot down on my 63rd mission by German anti-aircraft fire.

I was a prisoner of war of the Germans for about 9 ½ months at Stalag Luft I in Barth, Germany. We were liberated by the Russians and it took us about a month, five weeks, to get back to the United States. After that I was separated from the air force in September of 1945.

After this I continued my education and graduated in mechanical engineering from North Carolina State University in the class of 1949. I spent forty years in engineering and I’m now retired. Nothing before or since quite matches the thrill and excitement of that first D-Day mission.