1. Bloody Sunday is the name given to a massacre that took place January 30, 1972 in Derry, Northern Ireland. British Army soldiers fired on a crowd, killing 14 men, none of whom were armed. 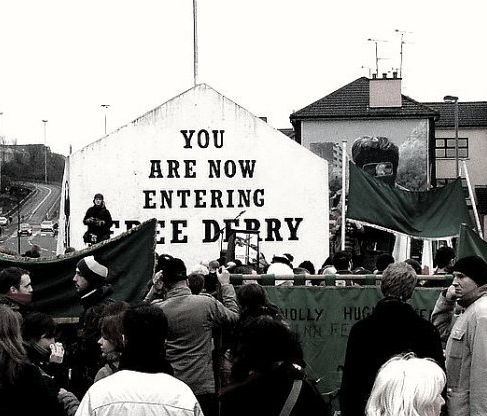 3. Starting in the late 1960s and continuing until 1998, the Troubles were defined by tit-for-tat violence between paramilitary groups on both sides. More than 3,500 people lost their lives, including more than 1,500 civilians slaughtered as part of the cycle of killings and retaliations. Many British solders also lost their lives.

4. The massacre on Bloody Sunday started as a civil rights march to protest internment, the practice of jailing people without a trial. The British Army, trying to squell the Troubles, had resumed the practice in 1971, using it against suspected members of Republican paramilitaries. The number of people who attended the march is disputed, although 10,000 is a consensus estimate.

5. The march became confrontational — which was expected. The British Army used a water cannon and rubber bullets to dispense the crowd, then brought in soldiers to arrest any remaining marchers. It was these soldiers — members of the First Battalion of the Parachute Regiment — who fired on the civilians.

6. The Widgery Report, completed months after the event, criticized the soldiers but insisted that march organizers were mainly to blame. It accepted the soldier’s story that they had been fired upon first. The Widgery report is discredited today, seen mainly as an attempt to whitewash the massacre.

7. The Saville Report, initiated in 1998 and completed in 2010, overturned the Widgery Report. It said the soldiers had not been fired upon and were not in danger, and that five of the soldiers knowingly fired at civilians who they knew did not pose a threat.

8. After the Saville Report was published, British Prime Minister David Cameron officially apologized for Bloody Sunday. “For someone of my generation, Bloody Sunday and the early 1970s are something we feel we have learnt about rather than lived through. But what happened should never, ever have happened,” he said.

9. Bloody Sunday is also the name for events in Dublin on November 21, 1920, when 31 people were killed in a day of violence between the British and Irish nationalists fighting for independence.